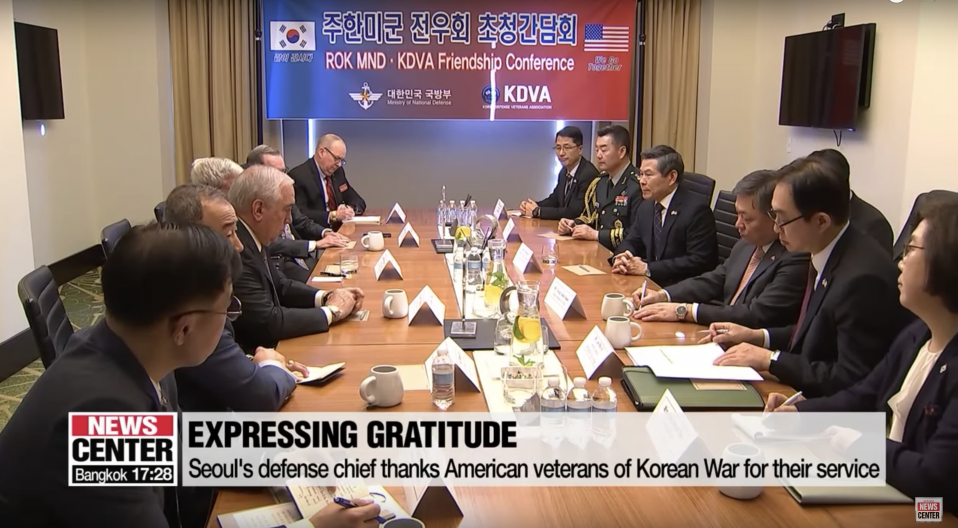 The Republic of Korea’s Minister of National Defense, Minister Jeong, Kyeong-doo requested a meeting with the Korea Defense Veterans Association (KDVA) to discuss ROK-U.S. Alliance and veterans topics on February 23, 2020 in Washington, DC.  Minister Jeong appreciated KDVA’s efforts in supporting both the veterans of the Korean War who fought together with South Korea and defense veterans who have continued to defend South Korea and support the ROK-U.S. Alliance for nearly seven decades.  KDVA and the Minister discussed upcoming events for the 70th Commemoration of the Korean War in Seoul and Washington, DC.  KDVA thanked the Minister for his strong support for our veterans as well as his commitment to the important future of the ROK-U.S. Alliance. 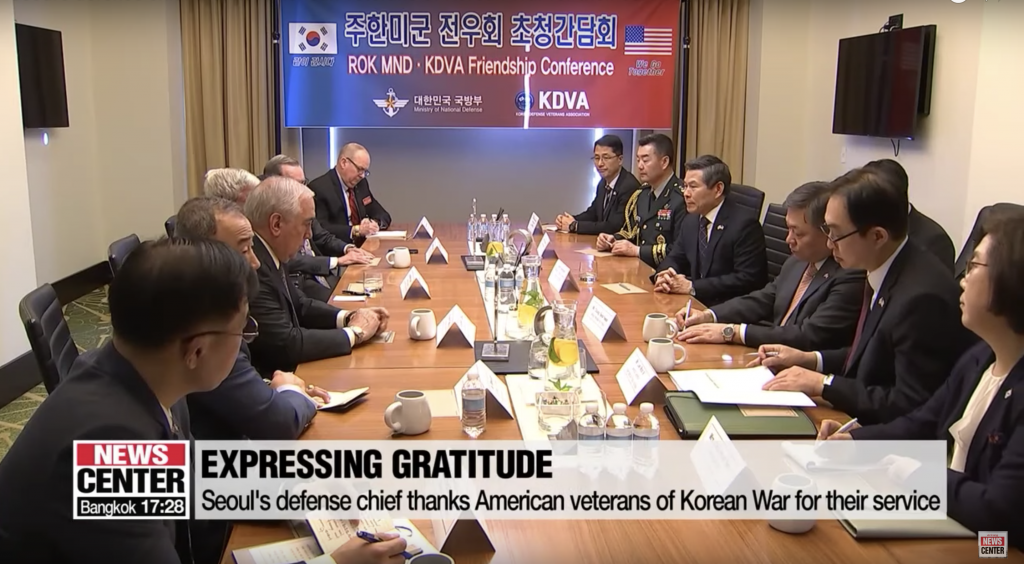 Minister Jeong is in Washington, DC to meet with his U.S. counterpart, Secretary of Defense Mark Esper, to discuss Alliance topics and to thank veterans organizations before the 70th Commemoration of the Korean War this summer. 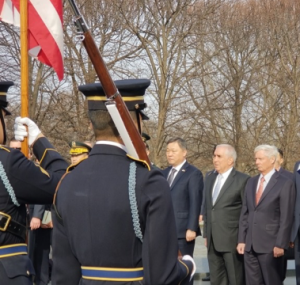 General Tilelli also attended as the Chairman of the Korean War Veterans Memorial Foundation, which is responsible for ensuring that the Korean War Veterans Memorial will be maintained in perpetuity.  The nonprofit organization is also establishing a Wall of Remembrance to be incorporated with the existing Memorial. The Wall will become the permanent home to the names of the 36,574 American service members and over 8,000 Korean Augmentation to the United States Army (KATUSA) who gave their lives defending the people of South Korea from aggression and ensuring their freedom. For more information or to make a donation for the Wall of Remembrance, please visit http://www.koreanwarvetsmemorial.org. 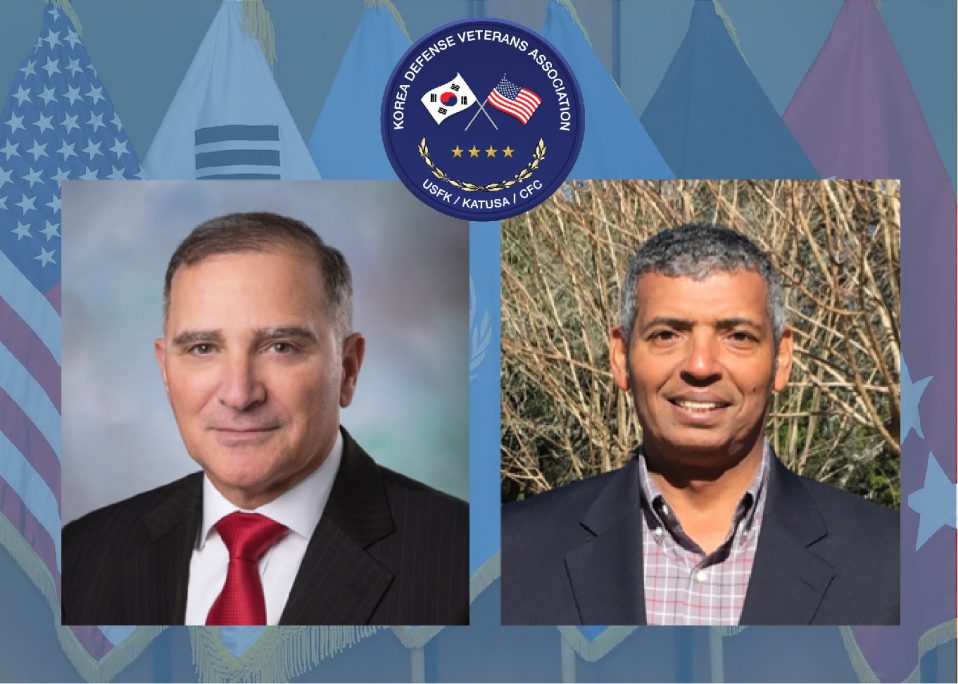 KDVA Welcomes Two Recent Commanders of ROK-U.S. Combined Forces Command to its Board of Directors

The Korea Defense Veterans Association (KDVA) is very proud to announce two new members to its Board of Directors:  General (Ret.) Curtis Scaparrotti and General (Ret.) Vincent Brooks.  Both Generals are well recognized and respected former commanders of the United Nations Command, Combined Forces Command, and U.S. Forces Command:  General Scaparrotti in 2013 to 2016 and General Brooks in 2016 to 2018.

“This is momentous news for the members of KDVA who are dedicated to supporting the ROK-U.S. Alliance,” said General (Ret.) Walter Sharp, the Chairman and President of KDVA.  “Both Mike and Vince are recognized internationally for building partnerships, and they have been vital in shaping the ROK-U.S. Alliance into one of the most important alliances in the world.  I am particularly thankful that they will volunteer their time and effort to personally help the ROK-U.S. Alliance.  This is a cause that each of our Board members have volunteered to do, and Mike and Vince will add even more to KDVA’s efforts with their deep love and respect for the Korean and American peoples.”

General Curtis “Mike” Scaparrotti, in 2019, completed a distinguished 41-year career in the U.S. Army as the Commander, U.S. European Command and Supreme Allied Commander Europe, NATO. From 2013 to 2016, General Scaparrotti served as the Commander of U.S. Forces Korea / United Nations Command / Combined Forces Command in South Korea. General Scaparrotti has extensive experience leading joint, multi-national organizations and collaborating with U.S. interagency and foreign diplomats. He served in key leadership positions at the tactical-operational and strategic levels of the U.S. Military to include as the Director of Operations at U.S. Central Command and as the 69th Commandant of Cadets at the U.S. Military Academy at West Point. He has commanded forces during Operations Iraqi Freedom, Enduring Freedom (Afghanistan), Support Hope (Zaire/Rwanda), Joint Endeavor (Bosnia-Herzegovina), and Assured Response (Liberia). He is a Senior Counselor at The Cohen Group, a member of the Board of Directors of the Atlantic Council, a member of the Advisory Board of the Patriot Foundation, and a Senior Fellow at the National Defense University.

General Vincent K. Brooks is a career Army officer who retired from active duty in January 2019 as the four-star general in command of over 650,000 Koreans and Americans under arms from April 2016 to November 2018 during a critical time on the Korean Peninsula and in northeast Asia.  He is widely respected as a speaker and leader of cohesive, innovative organizations. He is a combat veteran and a life member of the Council on Foreign Relations. General Brooks is on the Board of Directors of the Gary Sinise Foundation; a visiting Senior Fellow at the Harvard University Belfer Center for Science and International Affairs; a Distinguished Fellow at the University of Texas, with both the Clements Center for National Security and also the Strauss Center for International Security and Law; an Executive Fellow with the Institute for Defense and Business; and the President of VKB Solutions LLC.

General Scaparrotti and General Brooks noted that they are very thankful for this opportunity to serve on the KDVA Board given their many friends who share a passion for strengthening the ROK-U.S. Alliance.  Both look forward to helping KDVA with its outstanding programs, including, the remembrances of those who served during the Korean War, 70 years ago.  They are very optimistic about the future of KDVA in supporting the ROK-U.S. Alliance’s place in regional and international security and prosperity.

KDVA continues to be the premier association that supports and advocates for the people who built the Alliance and continue to serve it in U.S. Forces Korea and Combined Forces Command.  KDVA is a 501C(3) non-profit organization incorporated in the state of Virginia.  Please contact KDVA at contact@kdva.vet, visit www.kdva.vet, and follow us on Facebook ( @kdva.us) and Twitter ( @KDVAvets).

The Korea Defense Veterans Association (KDVA) was invited to a dinner hosted by the Republic of Korea’s Minister of Patriots and Veterans Affairs on February 20, 2020 in Washington, DC.  Minister Park, Sam-Duck hosted this dinner for KDVA Board members to discuss KDVA’s role in advancing and supporting the ROK-U.S. Alliance and several ROK-U.S. topics related to the 70th Commemoration of the Korean War.  Minister Park was impressed by the scope and variety of activities that KDVA will host or support in 2020 that include:

The Minister and KDVA leaders also discussed the possibility of expanding the current Korean War Veterans Revisit to Korea Program to include veterans who served after the signing of the Armistice Agreement on July 27, 1953.  This expansion would broaden South Korea’s deep appreciation for the millions of U.S. Service Members who have and continue to support and defend the South Korean people for almost seven decades.

Minister Park is in Washington, DC to meet with U.S. government officials and veterans organizations before the 70th Commemoration of the Korean War this summer. 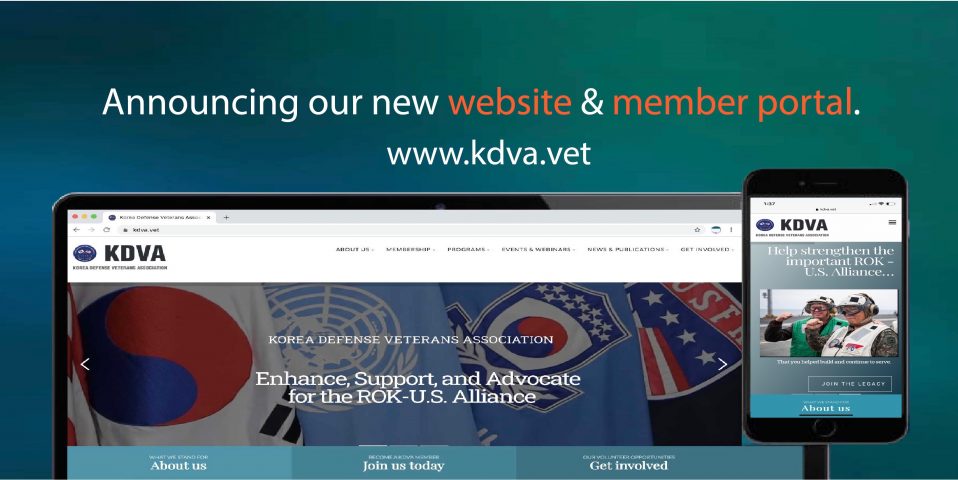 THROUGH THIS PORTAL, REGULAR AND HONORARY MEMBERS HAVE ACCESS TO:

On December 3rd, KDVA members received a separate email with information on how to access the new KDVA member portal, login and update your profile. If you didn’t receive this email or have questions, please email, contact@kdva.vet.

Your ticket for the: KDVA Launches New Website & Member Portal