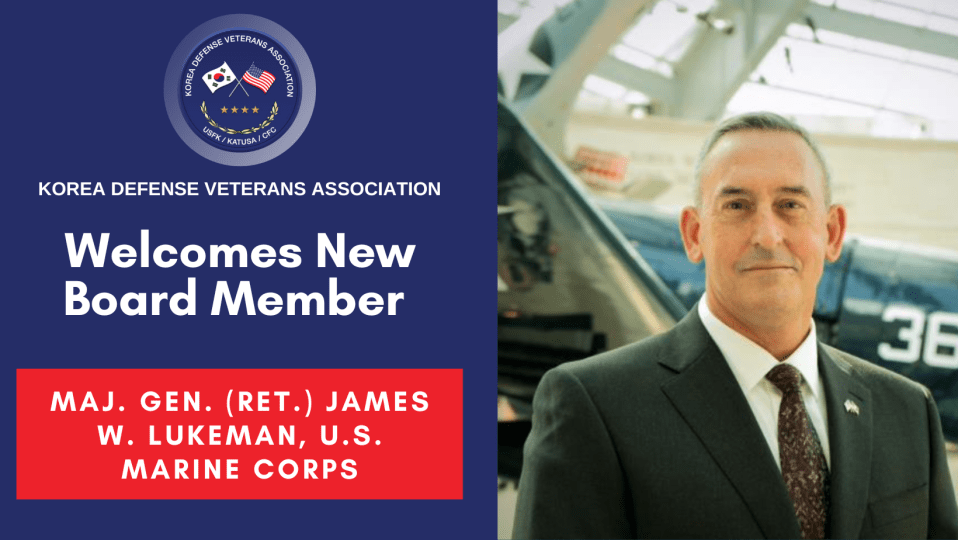 General (Ret.) Vincent Brooks, KDVA Chairman and President said, “Adding Jim Lukeman to the Board expands our reach to a broader set of Korea Defense Veterans, including our colleagues from the Sea Services. Having served with Jim while he was leading the most sensitive policy and planning actions for the Alliance, I am certain that his insights will be impactful in KDVA’s efforts to further strengthen the Alliance and support its defenders.”

While on active duty, General Lukeman served the Alliance as Commander of U.S. Marine Corps Forces Korea and subsequently as the Director of Strategy, Plans, and Policy for the United Nations Command, for the ROK-U.S. Combined Forces Command, and for U.S. Forces Korea.

General Lukeman said, “Being a part of this Association that cares deeply about the Alliance and our Veterans is an honor. Serving in Korea was one of the highlights of my career … we had a real-world mission serving in a country that is vitally important to the United States. I look forward to the great task of continuing to increase KDVA’s membership so that more people who care about the ROK-U.S. Alliance and our Veterans can participate to make a difference for Americans and Koreans. I am excited to get started!”

Maj. Gen. Lukeman retired on July 1, 2020 after 40 years of continuous active service. He was born in Beaufort, South Carolina and was raised in a Marine Corps family. He graduated from the University of Notre Dame and was commissioned through the Naval ROTC program in 1980.

KDVA has built a reputation as a premier association that supports and advocates for the people who built the ROK-U.S. Alliance and continue to serve it in U.S. Forces Korea and Combined Forces Command. KDVA is a 501C(3) non-profit organization incorporated in the state of Virginia. Please contact KDVA at contact@kdva.vet, visit www.kdva.vet, and follow us on Facebook (@kdva.us) and Twitter (@KDVAvets). 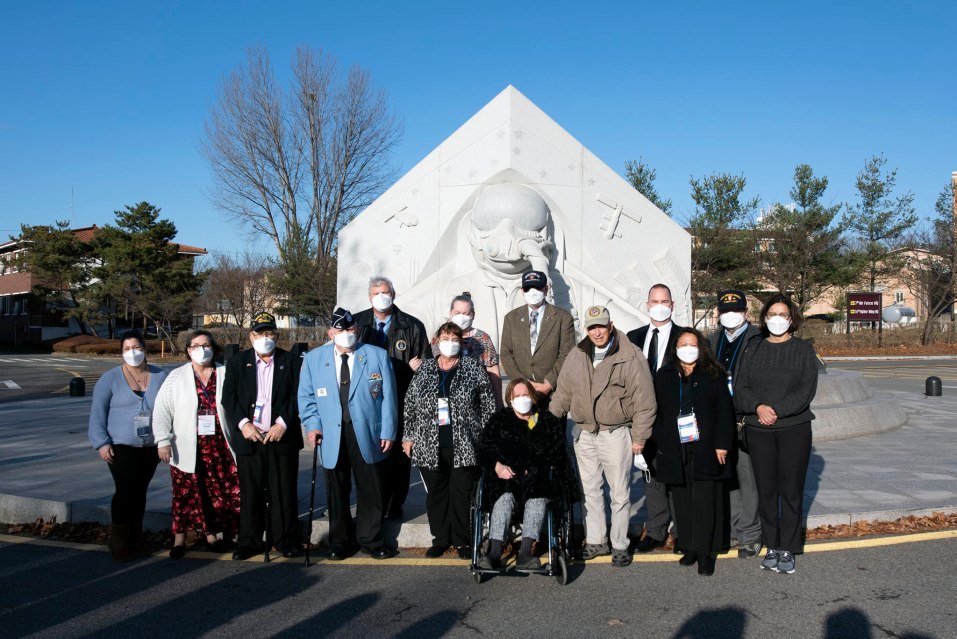 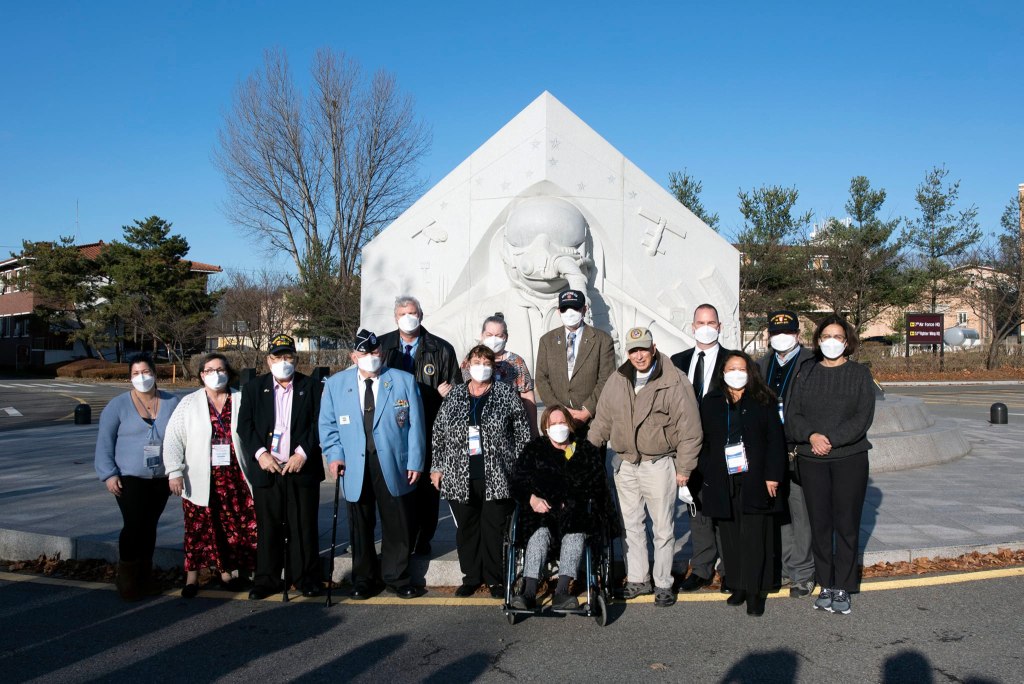 KDVA is very thankful for the ROK Ministry of Patriots and Veterans Affairs (MPVA) for sponsoring this important and exciting program.  KDVA is managing the application and selection of Korea Defense Veterans who served in Korea since the signing of the Armistice Agreement on July 27, 1953.

There are 23 slots for U.S. Korea Defense Veterans along with a companion (spouses or helpers) for each Veteran.  Participants will be selected from among KDVA members.  For U.S. Defense Veterans who are not yet KDVA members and would like to be eligible for participation in the Revisit Program, please join KDVA as a Regular Member by August 16, 2022 at – it is free. JOIN KDVA >

Additionally, MPVA is providing two additional slots for the other Sending States, and a travel companion. The Sending States that supported/are supporting the United Nations Command in Korea are:  Australia, Belgium, Canada, Columbia, Denmark, Ethiopia, France, Greece, Italy, Netherlands, New Zealand, Norway, the Philippines, the Republic of South Africa, Thailand, Turkey, the United Kingdom, and the United States. Over 3.3 million U.S. Service Members and thousands from the other Sending States have served in Korea since the signing of the Armistice Agreement.

MPVA will pay 100% airfare for Veterans and 50% for companions (spouses or helpers). MPVA will cover all other costs in Korea like meals, hotels, transportation, etc. 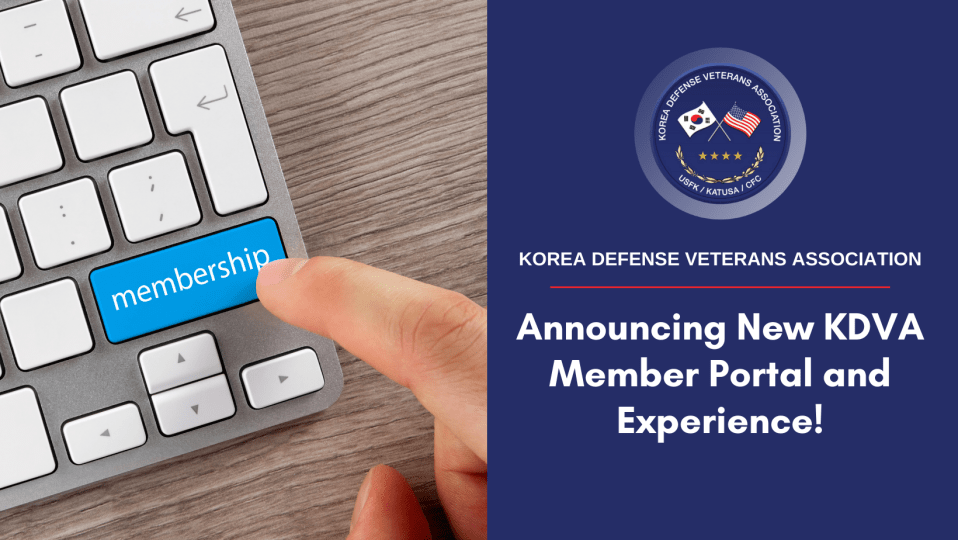 KDVA is excited to announce a new and improved KDVA Member Portal using a different system.  KDVA Members will have better capabilities to search our member director, discuss topics on forums, and create and connect with groups with shared interests.

We invite you to the new KDVA Member Portal! Our log in page is located at: https://kdva.memberclicks.net/login

Once logged in, please take this opportunity to ensure your information is correct and make any updates.  Having a good database will make it easier for all members to connect and help each other.

We hope you enjoy this enhanced member experience. If you have any KDVA Membership questions or run into any technical difficulties, please feel free to email us at contact@kdva.vet. 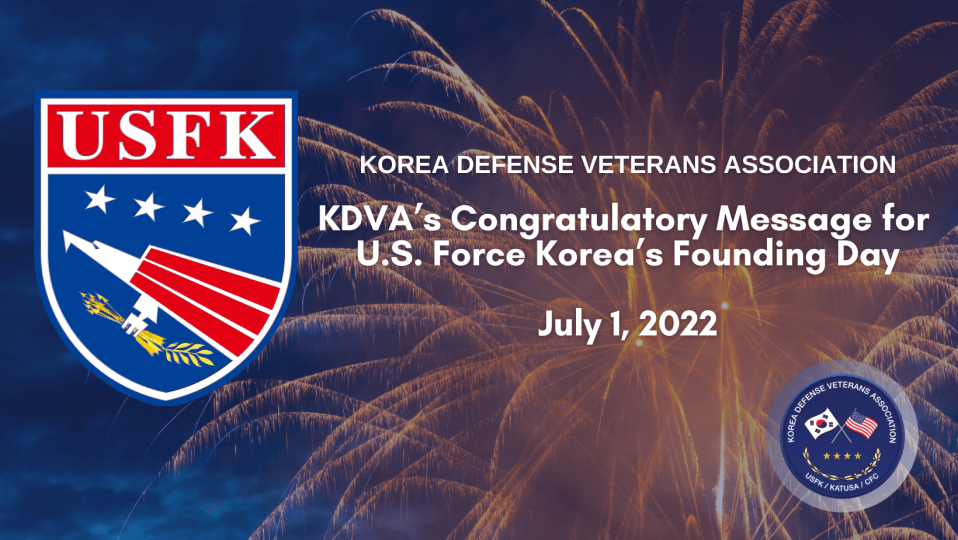 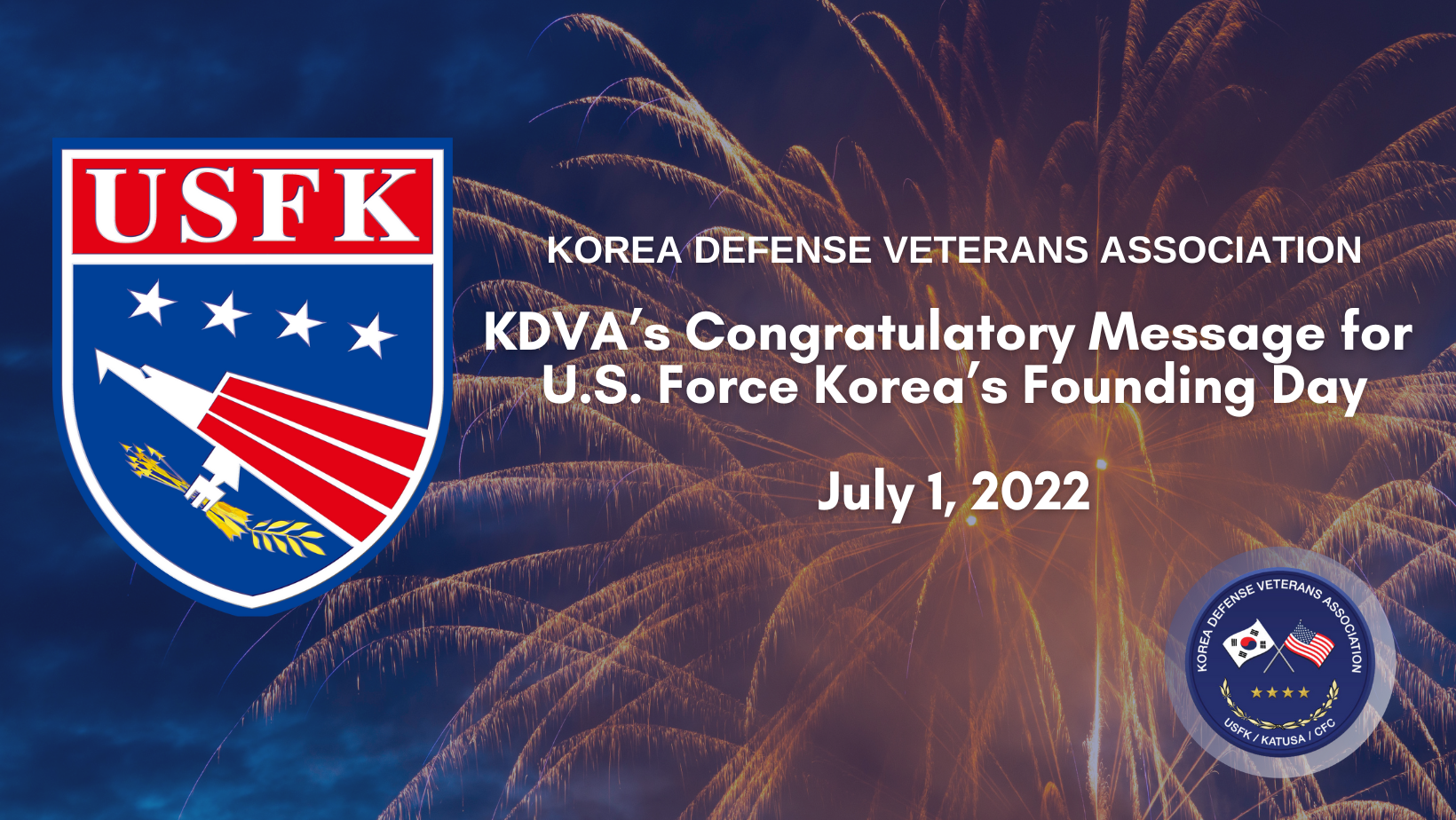 The U.S. – ROK Alliance is an exemplary alliance around the world. As the most evident demonstration of the commitment of the United States to the defense of the Republic of Korea the Alliance can see and feel every day the presence of U.S. Forces Korea. U.S. Forces Korea or USFK — those Service Members from the Army, Air Force, Navy, Marine Corps, Special Operations, and Space Force, the Department of Defense Civilians, and their Families who served in the Republic of Korea from the founding on July 1, 1957, to the present day – truly is the “heart” of the Alliance.

The Korea Defense Veterans Association (KDVA), formed to support and strengthen the Alliance and the Veterans of the Alliance, is very proud of USFK and extends congratulations on this, the 65th Anniversary of the founding day.

Working and living in USFK truly is “an assignment of choice” for so many reasons: the mission of standing shoulder to shoulder in the face of a relentless and dangerous north Korean threat, the caring and friendly Korean people, the vibrant and beautiful South Korean country, the people of USFK and the other U.S. government agencies, and the wonderful Korean culture.

To those who previously served within USFK – Happy Anniversary. For those who serve within USFK today – thanks for your service and for representing the United States so well in Korea.

Please know that your friends and former colleagues at KDVA support you and stand with you “Together for the ROK-U.S. Alliance.” 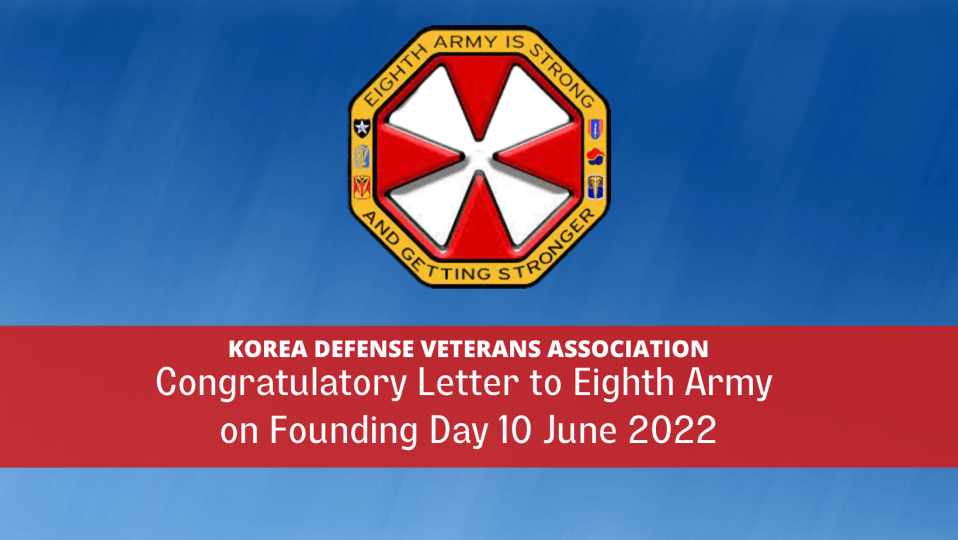 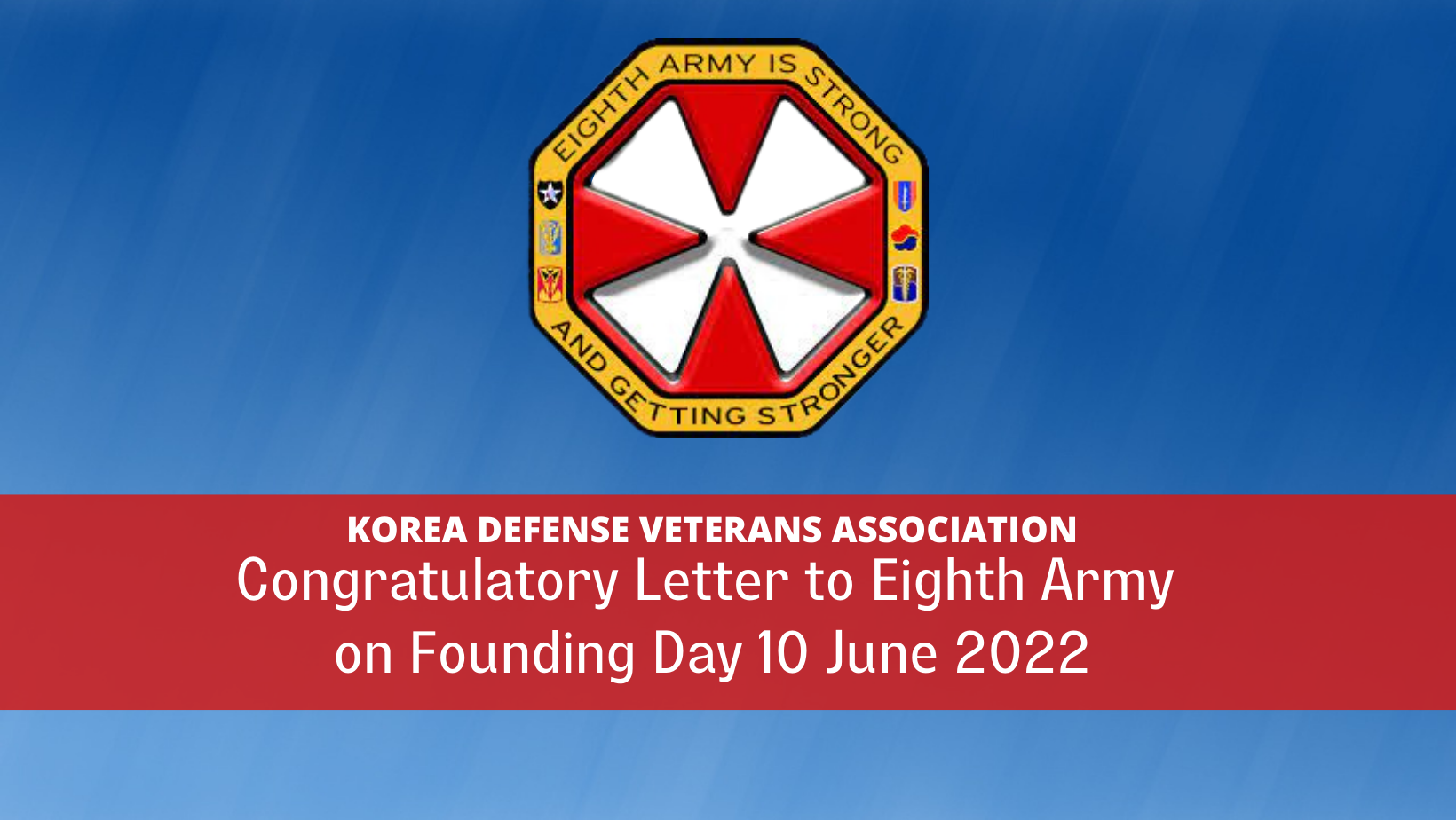 LTG William Burleson, CSM Robert Cobb, and the Soldiers of the “Pacific Victors!”

On this day of Eighth Army’s founding, the Korea Defense Veterans Association proudly salutes and thanks each Soldier of the Pacific Victors – past and present – who have answered our nation’s call throughout the Pacific, and since 1950 to defend the Republic of Korea and support the vital ROK-U.S. Alliance.

Serving through the seven decades of the crucible of the Korean War, the dangers of the early years along the Demilitarized Zone (DMZ), and various North Korean attacks and provocations, the Soldiers of the largest U.S. military unit in Korea have taken the lion’s share of responsibility for security in the most important region of the world. You are truly irreplaceable. Moreover, the unique and highly successful experiment of the Korean Augmentation to The U.S. Army or KATUSA program continues to form the closest military relationship in the Alliance.

KDVA’s sole mission is to support the Alliance and our Veterans. On this anniversary, please know that we at KDVA are standing with the Eighth Army. We pledge that our members, partners, and supporters will remember Eighth Army’s years of sacrifices as we continue working “Together for the ROK-U.S. Alliance.” 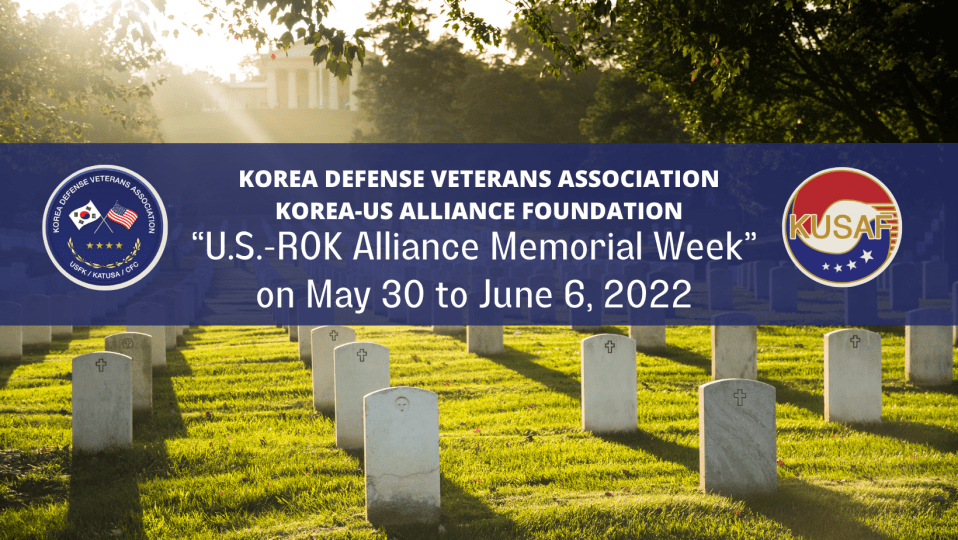 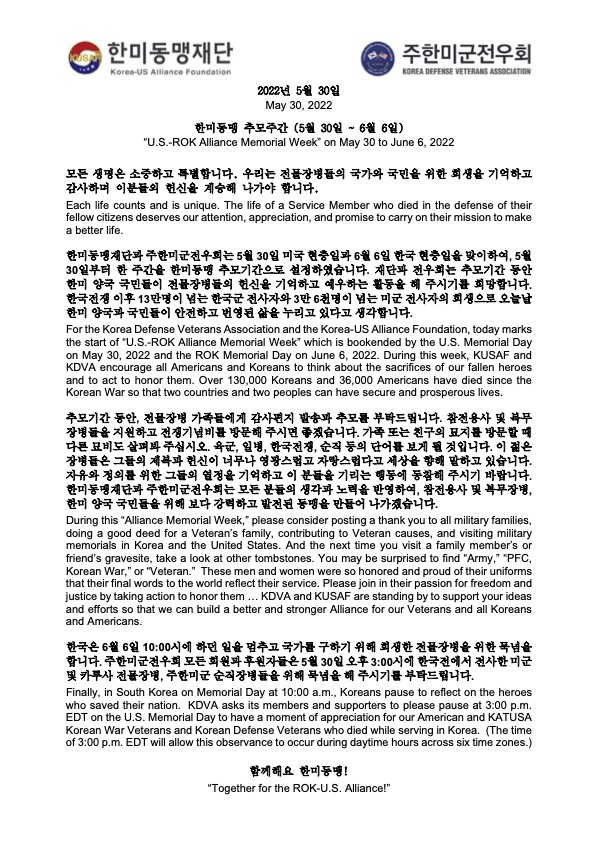 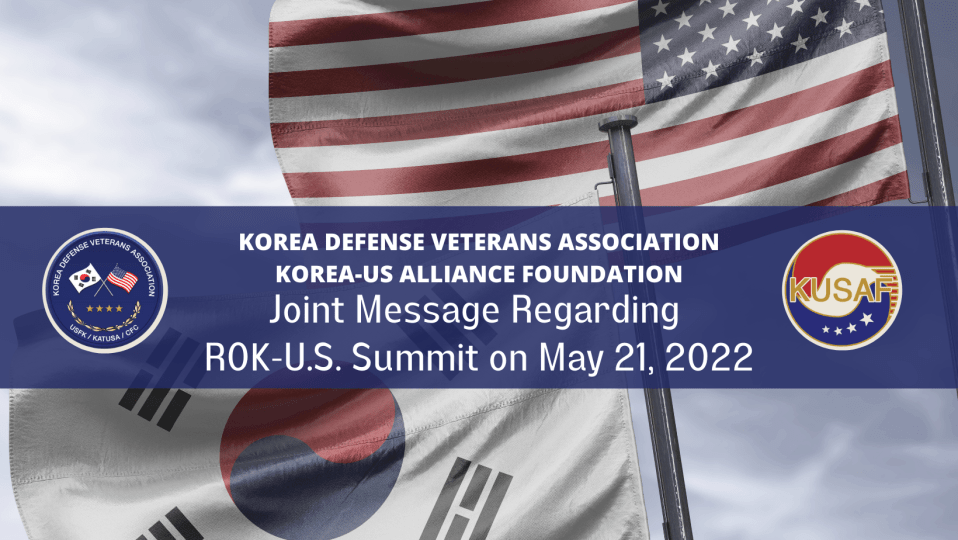 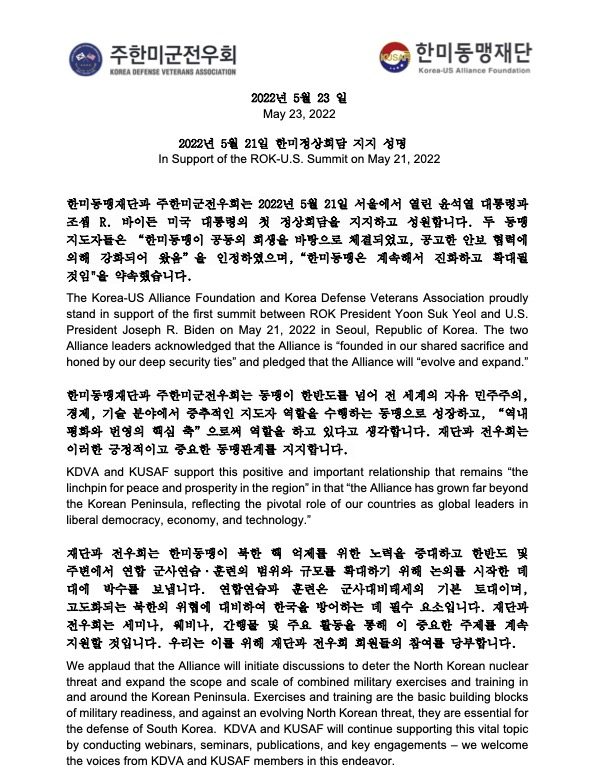 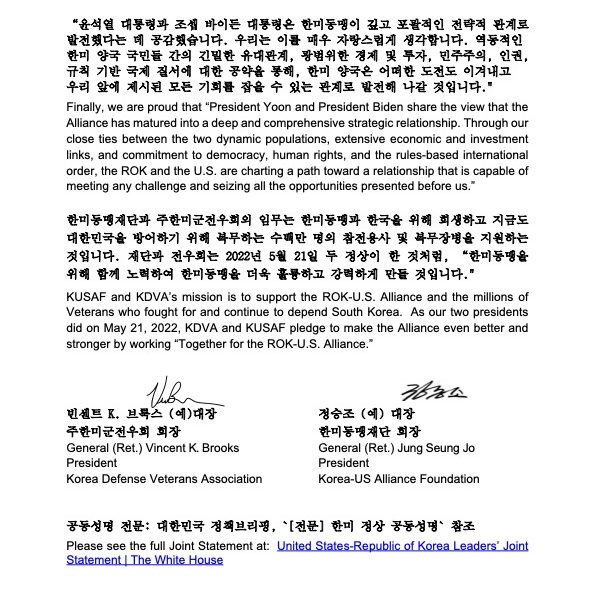 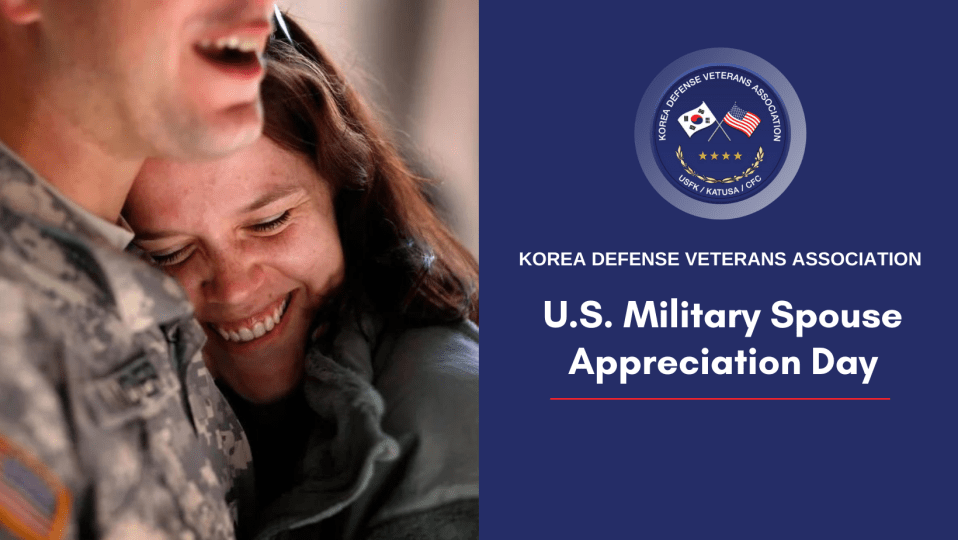 May 6, 2022 is “U.S. Military Spouse Appreciation Day” and that is a day that is personally meaningful to me.  My wife was a career military spouse.  So was my mother.  So, also was my mother-in-law as well as many other relatives.  On this special day of acknowledgment, the Korea Defense Veterans Association salutes and APPRECIATES all of the U.S. Military Spouses, past and present, who have endured sacrifices and hardships not understood by most of their fellow citizens.  These spouses gave their warriors a reason to serve and the support needed to do it.  Military spouses also served in their own ways — building a community of support for other military spouses and families, standing shoulder-to-shoulder with their warriors, adapting to constantly changing environments and locations, volunteering on military installations and in surrounding communities, making careers that ran concurrently with the service of their spouses, and so much more.

We particularly acknowledge and appreciate the spouses of 1.8 million Korean War Veterans and of the 3.3 million Korea Defense Veterans.  For most of the seven decades of the U.S. military presence in Korea, military spouses were not permitted to be present in Korea — meaning long periods of separation waiting in worry for their warriors to return to them.  And for too many, those spouses recognized with a Gold Star, their warrior spouses did not return alive.  In recent decades, military spouses and families have been permitted to accompany their warriors while serving the Alliance in Korea.  Their presence in the military communities of U.S. Forces Korea added a dimension that made overseas service in Korea a “home away from home.”  And I can personally attest to the fact that the Korean people, especially the spouses of Korean military members, made U.S. military spouses feel like long-lost relatives, forging lifelong relationships that are a key thread in the fabric of the ROK-U.S. Alliance.

Thank you, U.S. Military Spouses!  We appreciate you. 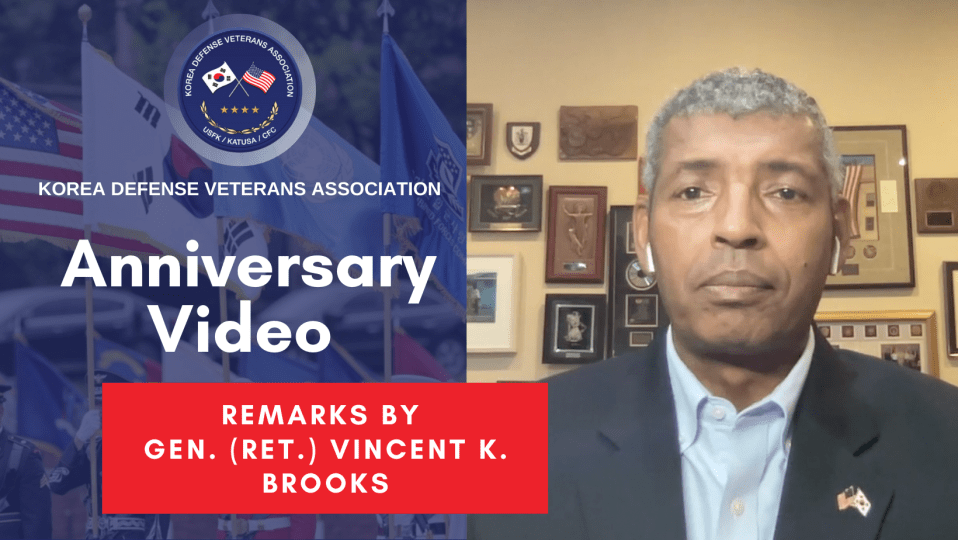 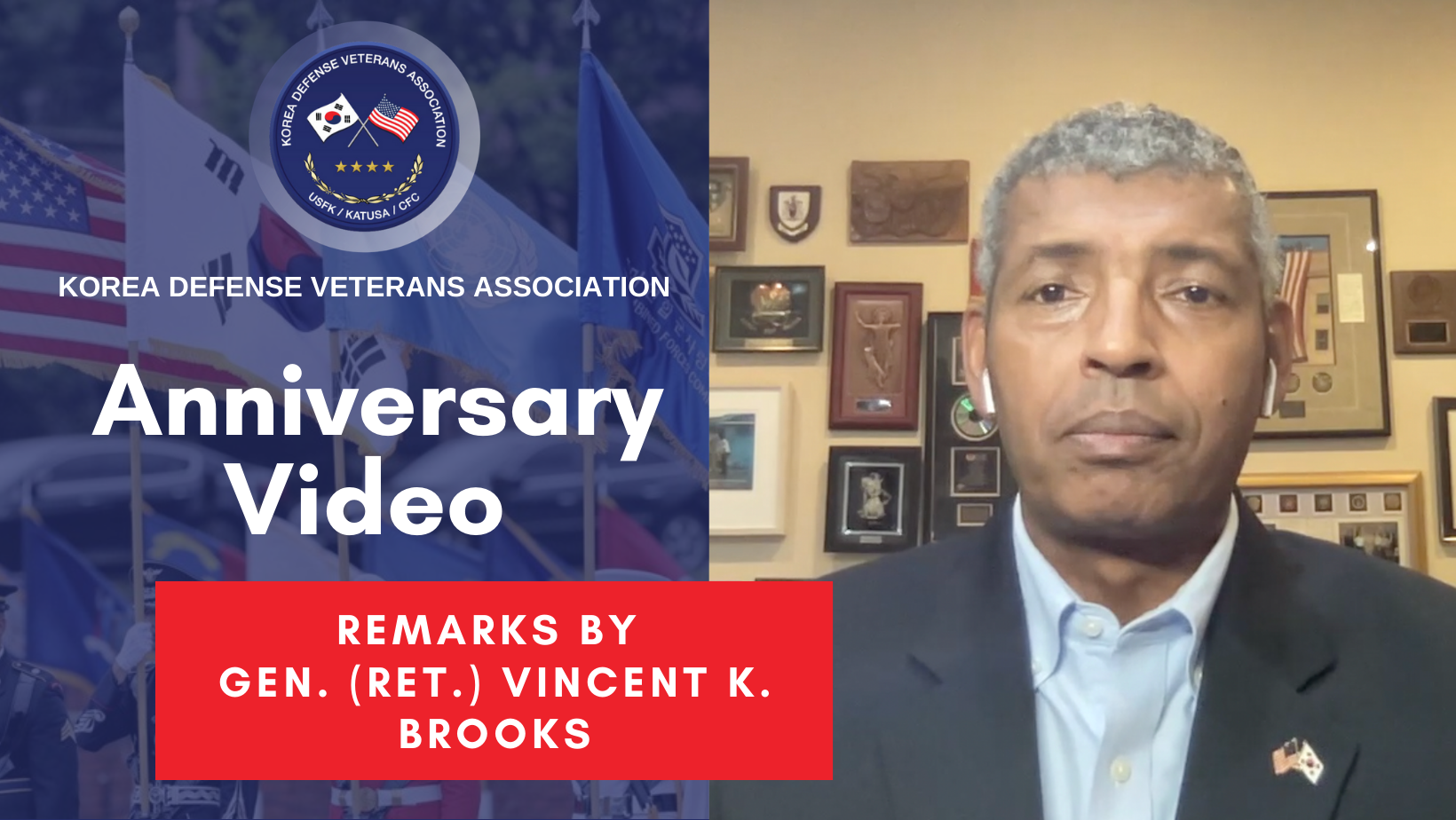 KDVA is very thankful for our members, donors, partners, and supporters for enabling our mission to enhance the ROK-U.S. Alliance and support our Veterans.  KDVA is very proud of our members who continue to make a difference.  So, please join us in celebrating the people who built and support the Alliance, especially in 2022 under our theme of “We Are the Alliance.” 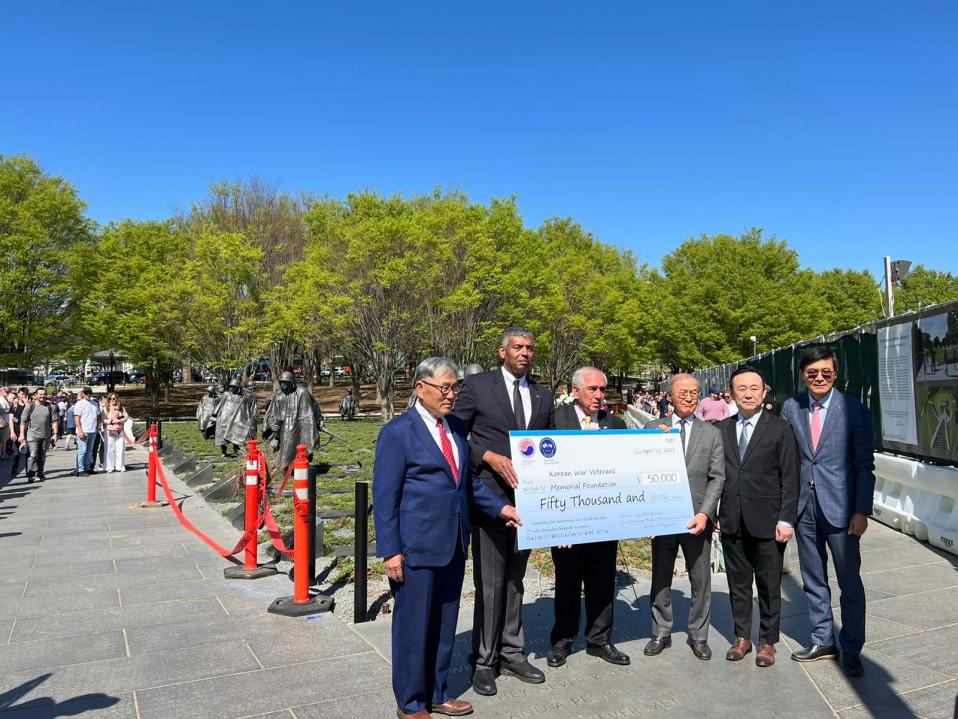 KDVA and our close partners, the KATUSA Veterans Association (KVA), made a donation of $50,000 to the Wall of Remembrance at the Korean War Veterans Memorial in Washington, DC on April 15, 2022.  KATUSAs are Korean Augmentees to the U.S. Army, a program started by General Douglas MacArthur during the Korean War.  KATUSA Soldiers are selected to serve in the U.S. Eighth Army throughout Korea.

The Wall of Remembrance contains the names of 36,595 U.S. Service Members and 7,174 KATUSA Soldiers.

The donation ceremony took place at the Korean War Veterans Memorial.  General (Ret.) John Tilelli, Chairman of the Korean War Veterans Memorial Foundation (KWVMF), received the $50,000 donation from KDVA and KVA. KVA Chairman Kim, Hae-sung said, “I hope that the Wall of Remembrance can serve as a small token of our deep gratitude to repay the sacrifices of those who gave their lives to protect the freedom and democracy of Korea. We all know that Korea is a prosperous country today, and this proves that their sacrifice has not been in vain.” 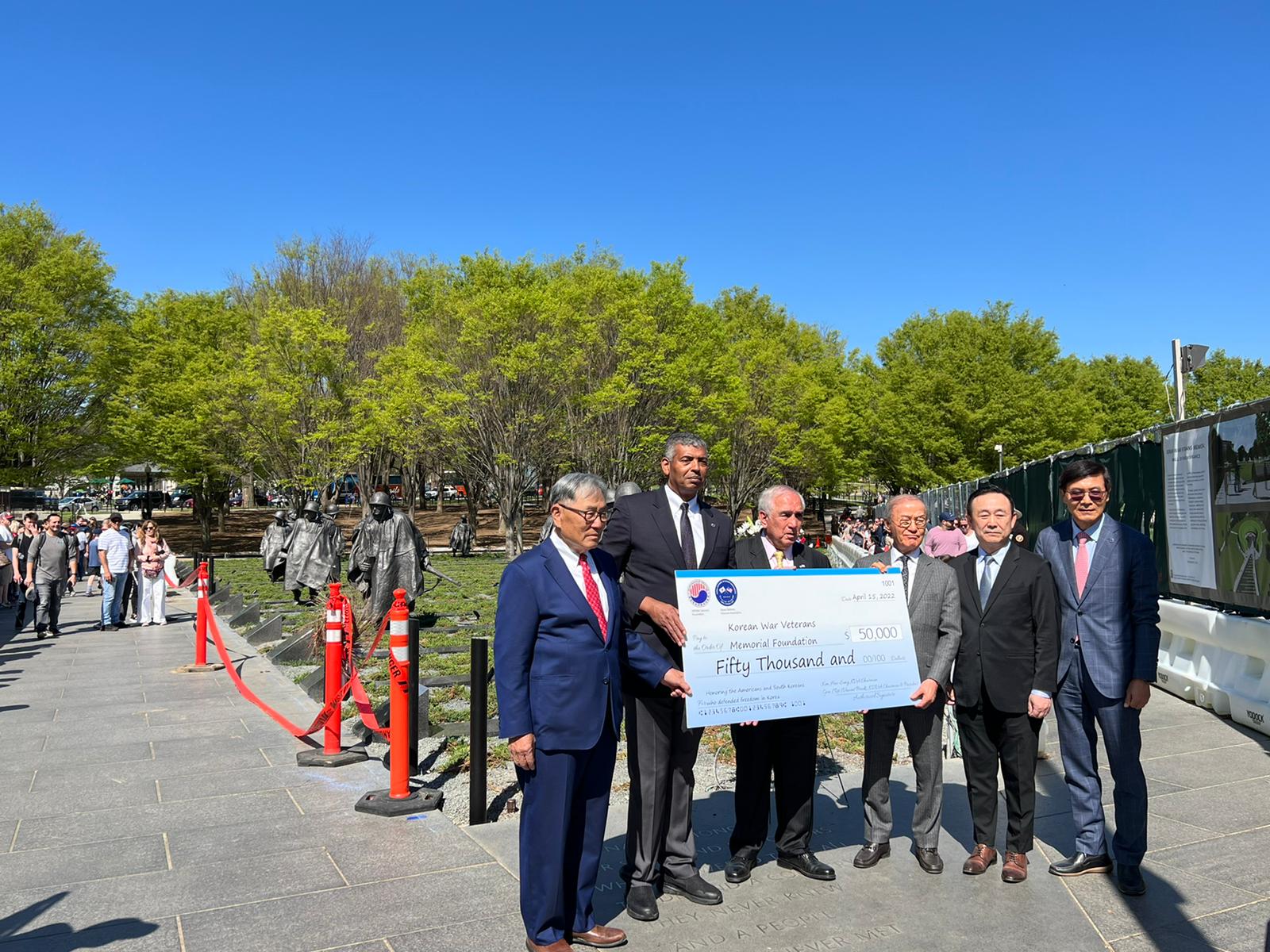 After the ceremony, KDVA hosted a lunch sponsored by KVA for ROK-U.S. Alliance leaders from the USG and ROKG, Veterans organizations, think tanks, the Korean-American community in the DC area, and journalists in the DC area. KDVA and KVA would like to thank all these supporters of the Alliance and Veterans who attended, including the First Lady of Maryland Yumi Hogan, a Military Mom of a Korea Defense Veteran. 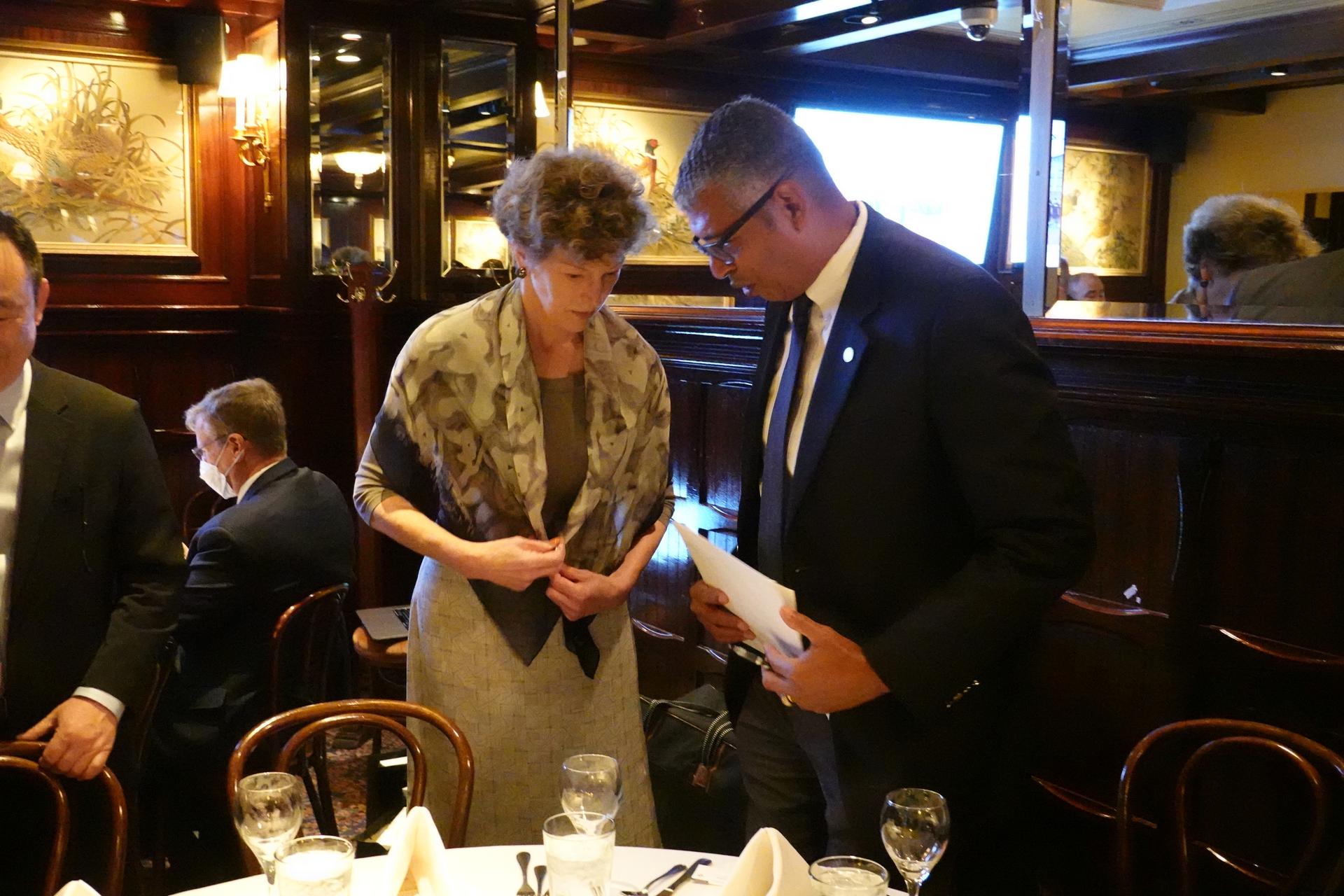 Your ticket for the: KDVA and KATUSA Veterans Association (KVA) Make Donation to Wall of Remembrance at Korean War Veterans Memorial in Washington, DC