On November 17, 1950, Private Bob Grandfield debarked the troop transport in Wonsan. The son of a Cape Cod physician, the 20-year old medic was serving with the 7th Infantry, 3rd Infantry Division. Bob graduated from high school in 1948. Rather than take the chance of being drafted for three years of active duty, at the advice of his father, Bob enlisted in the Army under a program for 18-year old men; he would spend one year on active duty followed by six years in the reserves. While stationed at Fort Hood, Texas, Bob volunteered for medic training, by his own admission, to avoid assignment to the motor pool. Upon completion of his year in Texas, Bob enrolled at Tufts University, just outside Boston.

When President Truman committed American forces to defend South Korea in the summer of 1950, Bob was recalled to active duty and faithfully honored his commitment. He reported back for duty at Fort Dix, New Jersey, then completed refresher training at Camp Breckenridge, Kentucky. He took a train to Seattle, then flew to Tokyo via Alaska. Like many who served long ago, Bob remembers the lighter moments. Landing in the Aleutians for a layover, the troops disembarked the aircraft and were directed to a mess hall. The weather was cold and windy, a precursor of what he would endure in Korea. As an officer counted heads getting off the plane, a Soldier said, “Don’t worry sir, ain’t nobody going AWOL in this place.”

Arriving in Korea with other replacements, Bob was assigned to the 7th Infantry’s heavy mortar platoon. The regiment had established defensive positions north of Hungnam to support the withdrawal of the 1st Marine Division and Regimental Combat Team 31 from the fighting at the Changjin (Chosin) Reservoir. In addition to combat wounds, Bob and his fellow medics treated many Soldiers for frostbite. 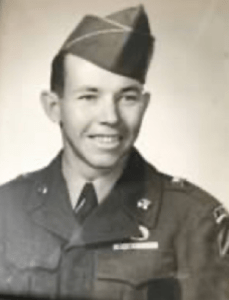 At the beginning of the war, American troops were probably overconfident, and the slogan of “home by Christmas” was popular with the troops. The entry of the Chinese into the conflict changed all that. To this day, Bob has always been complimentary of the Army’s efforts to get a hot Thanksgiving meal to the front lines in 1950. He vividly recalls eating mashed potatoes out of his helmet liner in the rain. To his daughter-in-law in Virginia Beach, he has assured her many times that no matter what food item didn’t turn out “just perfect” for the family Thanksgiving meal, it’s always nicer than his meal in 1950. To this day, Bob has been an easy-to-please, appreciative, nothing rattles him person. His experiences at age 20 gave him a unique perspective for the rest of his life.

When X Corps was ordered to evacuate through the port of Hungnam, the 7th Infantry defended the perimeter that facilitated the evacuation of 105,000 UN forces, an estimated 91,000 North Korean refugees, and over a quarter million tons of equipment and supplies during the “Miracle of Christmas.” In his medical bag, Bob carried two mortars over 20 miles as the 7th Infantry withdrew to Hamhung, only to be told to throw them overboard as he embarked the troop ship. The 7th Infantry Regiment was the last unit to leave Hungnam, departing the port on Christmas Eve.

The 7th Infantry Regiment unloaded in Pusan on December 30. The following day, the 3rd Infantry Division was assigned to the Eighth Army’s I Corps. After being reequipped, the division took its position in the western section of the UN line south of Seoul. Bob continued to serve with the mortar platoon as the 7th Infantry Regiment advanced north. By mid-April, the regiment had established positions north of the Imjin River. 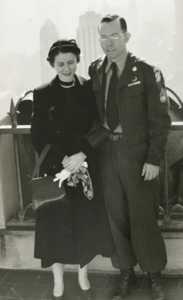 On April 22, the Chinese People’s Volunteer Army began the Spring Offensive, forcing the division to withdraw to positions south of Uijongbu. The division returned to the reserve following heavy losses during this period. In mid-May, the division moved east to assist units defending the central sector. By the end of June, the 3rd Division occupied the Chorwon- Kumhwa Line.

Armistice negotiations began on July 10, 1951. As noted in the division’s official history, the character of the war changed from “one of movement and major offensives to a fairly static defensive conflict.” Later that summer, Bob was assigned to an infantry platoon. He still recalls the mortar platoon as easier duty. “With the mortar platoon, when it was time to change positions, we packed up the trucks and moved. In the infantry platoon, we walked.”

Bob finished his tour in Korea as a sergeant on September 7, 1951. He was awarded the Bronze Star Medal for “meritorious service in connection with military operations against an armed enemy in Korea.” He jokingly tells his children that “the Army flew me to Korea, by way of Seattle to the Aleutian Islands to Tokyo, and then by ship to Korea. On the way home, it was 14 days on a slow troop ship. And I had contracted malaria, to boot.” He returned to Massachusetts and attended law school under the G.I. Bill, where he met his future wife, Mary Cunningham. Bob and Mary were married for 51 years, until her passing in 2005. Bob was a devoted caregiver in the last years of Mary’s life, when she was in poor health.

After her passing, he sought opportunities to serve his community. Bob began volunteering with the Princess Anne Rescue Squad in Virginia Beach, where he currently serves as the chaplain. His medic days behind him, Bob doesn’t ride the ambulance, but serves a variety of administrative functions for rescue squad. He recently celebrated his 91st Birthday.

Bob and Mary raised five children. Today, he is a proud Grampa to seven grandchildren and two great grandchildren.

About the Author: Jim Grandfield is Bob’s youngest son. He is a 1986 graduate of the U.S. Naval Academy who served five years as a surface warfare officer.