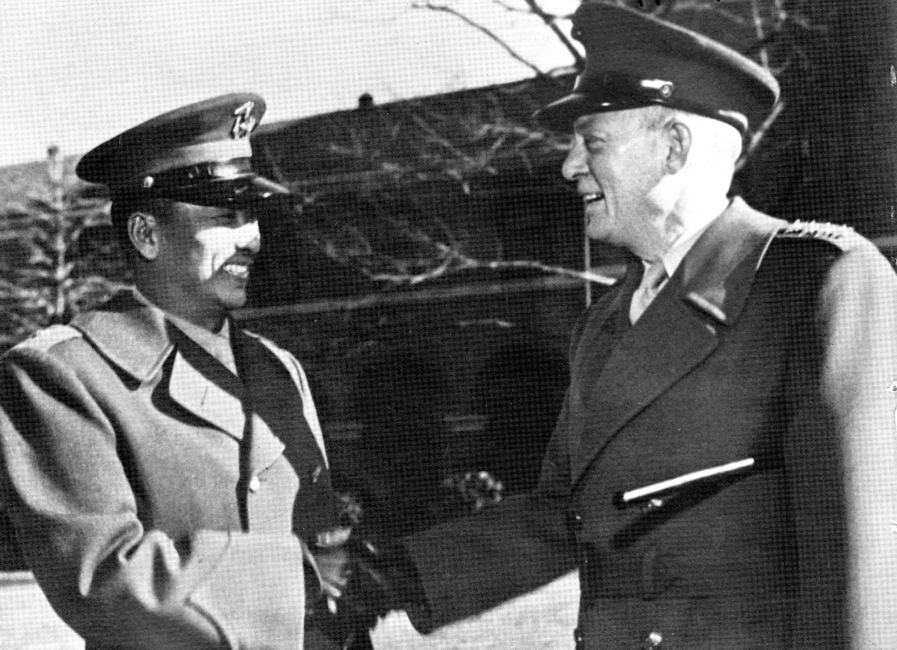 At 06:10 on September 27, 1950, Republic of Korea (ROK) Marines raised the flag in front of the Seoul Capitol. Three months earlier, the ROK Marine Corps faced skepticism from the other services and doubt within its own ranks. Created without American advisors or equipment, the nascent ROK Marine Corps was a product of the determined efforts of its founder and first Commandant, Colonel Shin, Hyun-joon. The Marines’ superb performance in the early battles of the Korean War is a testament to his leadership.

In the wake of the failed amphibious assault at Yosu, Rear Admiral Son, Won-il tasked Shin with forming a ground combat unit within the ROK Navy. Shin had participated in the October 1948 military in which four navy cutters attempted to land ROK Army Soldiers to suppress the rebels who occupied the port city. After the operation, Shin submitted a combat report arguing for the creation of a specialized unit within the Navy responsible for amphibious operations. Admiral Son assigned Shin to lead the new unit on February 1, 1949.

Shin found few takers as he sought officers and noncommissioned officers for the new unit. Those with knowledge of the Imperial Japanese Navy knew ground combat units as backwater assignments relegated to garrison defense duties by war’s end. Kim, Seung-un rebuffed Shin’s first two requests to transfer to the unit before accepting an offer to serve as chief of staff. Navy commanders withheld sending their model sailors in response for a call for noncommissioned officers, instead sending “those who were brave with a strong sense of justice, but occasionally caused some trouble in their units.” Despite these challenges, Shin assembled 80 officers and noncommissioned officers to lead the new unit. Three hundred sailors from the Navy’s 13th Recruit Class began training as the 1st Marine Corps Class.

On April 15, 1949, the ROK Marine Corps was activated in a simple ceremony at the Deoksan Air Base in Chinhae. The Marines assembled before the dignitaries were a humble lot, wearing an assortment of discarded uniforms and helmets; Japanese leggings were worn over oversize American boots. Those issued weapons carried Arisaka Type-99 rifles; others carried wooden drill rifles.

A veteran of fighting in Manchuria, Colonel Shin was accustomed to material deficiencies. He demanded tough, physical training. Noncommissioned officers drilled the new Marines on Deoksan’s cement landing strip and marched them up the 1,800-foot Chonja Peak so often that the mountain quickly became a symbol of the new Corps.

In late August, the ROK Army Chief of Staff requested that Colonel Shin send Marines to Jinju to protect the town from guerillas who had operated in the nearby mountains since the Yosu rebellion. In exchange for dispatching a battalion-sized unit to Jinju, the Army agreed to leave its equipment to the Marines. Over the next four months, Marine patrols restored security to the region.

On December 28, Colonel Shin and 1,200 Marines landed at Jeju City where a protracted insurgency had shattered the peace of the tranquil island. The Marines were as aggressive in earning the trust of the people as they were ferreting out remaining guerillas, assisting farmers with spring planting, and arranging free medical care. Colonel Shin worked to establish the Corps’ ethos, establishing an NCO Training Unit to instill a fighting spirit in the new Marines. He pressed Navy Headquarters for more Marines and equipment.

Despite success in early operations, Navy Headquarters refused to expand the Corps. This led to a sense of despair among the Marines. On June 23, the Corps’ senior officers resigned en masse. Two days later, North Korean Army units attacked south to start the Korean War.

The Korean War transformed the Marine Corps. Resignations were withdrawn as the Marines prepared for war. Colonel Shin’s efforts to restore trust among the people of Jeju were reflected in over 3,000 islanders joining the Marine Corps; the 126 women who served would be the only women to earn the title “Marine” for nearly half a century. A battalion-sized unit landed at Kunsan on July 16. They fought the North Korean People’s Army’s 13th Regiment for four days, delaying the attack south. Marines under the command of Lieutenant Colonel Kim, Seung-un earned the war’s first unit-wide promotion for their actions at Chindong-ni, and received international acclaim as the “Ghost-Catching Marines” following their amphibious landing at Tongyoung.

On September 3, the U.S. Far East Command approved the attachment of the ROK Marine Corps — organized into three infantry battalions, a reconnaissance company, and a headquarters element — to the 1st Marine Division. Initially assigned as the landing force reserve, the ROK Marines were tasked with clearing Incheon and the Kimpo Peninsula following the Incheon landing. ROKMC battalions were attached to the 1st and 5th Marine Regiments as they began their final assault on Seoul. 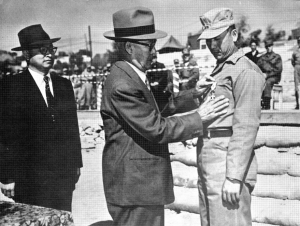 President Syngman Rhee awards Major General Shin the Order of Military Merit, Taeguk, on October 15, 1953 in a change-of-command ceremony for the commandant.

Colonel Shin invited Major General O.P. Smith, Commanding General of the U.S. 1st Marine Division, to review the Korean Marines following the liberation of the capital. The battle-tested Marines who paraded before the division commander were a sharp contrast to those assembled 18 months earlier. All wore complete uniforms, packs, and web equipment; their rifles, machine guns, and mortars were “spotless.” Writing in his log, the veteran of fierce fighting on Cape Gloucester, Peleliu, and Okinawa noted, “These Korean Marines were quite remarkable.”

After leading the ROK Marines in the defense of Wonsan, Colonel Shin turned over command of the newly established 1st ROK Marine Regiment and focused on training and equipping the rapidly expanding Corps. As Commandant, General Shin forged a relationship with the United States Marine Corps and instituted training and education practices modeled on the American system. The relationship between the two Corps would continue throughout the Korean War and Armistice, including deployments to Vietnam and Iraq. General Shin served as commandant throughout the war, remained in uniform until 1961, and served two assignments as an ambassador. He holds the distinction of being South Korea’s longest serving general officer and longest serving ambassador.

Lieutenant Colonel Durand is a graduate of the 31st Marine Corps Course at the ROK Naval War College. He has worked with General Shin’s children to translate their father’s autobiography, “Memoirs of an Old Marine.” His article, General Shin Hyun-joon, “Father of the Marine Corps,” is available at http://icks.org/n/data/ijks/2017FW-6.pdf.

See this and other stories of our Veterans in KDVA’s “I Know a Korean War Veteran Campaign” webpage at https://kdva.vet/i-know-a-korean-war-veteran-campaign/.

Your ticket for the: General Shin, Hyun-joon, ROK Commander and Commandant