Growing up, Korea was an important part of the Champoux family. It came in the form of traditional Korean masks hanging on the living room walls and his father occasionally talking about Korea, although rarely mentioning the war. One of eight siblings, General Champoux was the only one to follow his father’s footsteps into the Army. General Champoux was commissioned a Second Lieutenant by his father on October 21, 1977. Now with his son as a fellow Soldier, Lt. Col. (Ret.) Francis L. Champoux began to share more experiences, finally broaching the topic of his war experiences in World War II, Korea, and Vietnam. One such story was when then-Captain Champoux was first assigned to the 65th Infantry Regiment during the Korean War. Upon being assigned to the unit, there were some initial difficulties in terms of connecting with his troops. However, he eventually earned their respect when he made it clear that he would share the dangers of combat with his men, even gaining the nickname “El Toro” (Spanish for “The Bull”). Colonel Champoux expressed great pride in his son’s decision to serve. Unfortunately, he passed away at the age of 65, before seeing his son become a general.

During a deployment to Iraq, General Champoux received the news he would be assigned to Korea. Following an emotional plane ride to his new duty station with his wife, he settled into his new role as the Eighth Army Commanding General. During his time in Korea, he was able to enlist the help of a Korean aide-to-camp and use the book Honor and Fidelity to find the exact location where his father fought. Over sixty years later, General Champoux made a sort of pilgrimage with some family and staff. He was able to follow his father onto the grounds near Cheorwon, where then-Captain Champoux was part of the Battle of Jackson Heights. Regarding the experience, General Champoux explained, “To get the chance to serve where he had served, where he had fought, was really, really precious to me. Even now, I’m so proud of that. I’m so grateful that I had that opportunity. Although I didn’t need to be any closer… I felt that much closer to him.” Reflecting on his initial assignment to Korea, General Champoux believes it was partially due to divine providence. His father had often called Korea the “Land of the Morning Calm” and after living there, General Champoux can attest that, “there is something about when you’re out in the field. [When the sun is rising above the mountainous terrain,] there is a sense of quiet and calm.” Although their experiences in Korea were vastly different, both General Champoux and his father are and will remain Soldiers for life.

There are some things only those who have experienced war will understand. To many, there is a comfort in believing in such a place as Valhalla, a place for only the souls of warriors. General Champoux pronounces, “There’ll be a time when I’ll sit around a fire with my dad at Valhalla and we’ll talk about our combat service and we’ll talk about our time in Korea… [but] I can wait. There’s a lot that I still want to live for.” General Champoux’s commitment to the ROK-U.S. Alliance remains strong through his volunteer efforts with KDVA as a Board member and his current position as Senior Vice President of Hanwha Defense International, a South Korean defense company in the Washington, DC area. He believes that strengthening the Alliance through various channels can further solidify the bonds forged during the Korean War. 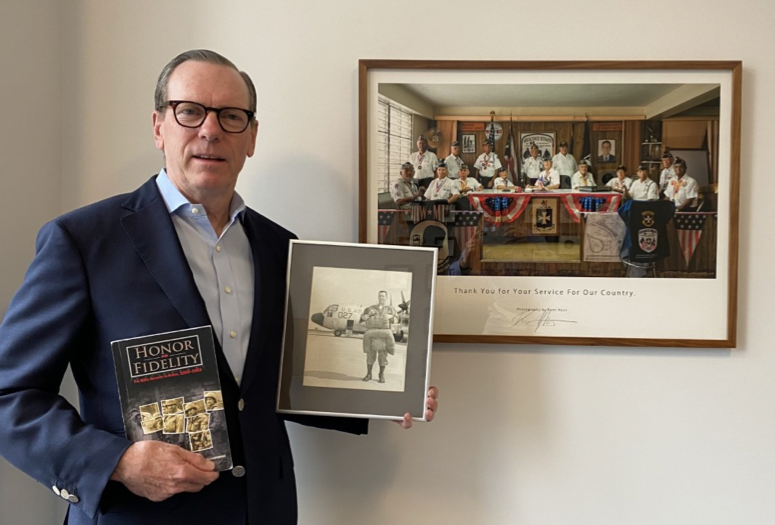 Hanging on Lt. Gen. (Ret.) Bernard Champoux’s office wall is a photo of the surviving members of the 65th Infantry Regiment “Borinqueneers,” the unit where his father, Lt. Col. (Ret.) Francis L. Champoux, was a company commander during the Korean War. A copy of Honor and Fidelity, originally presented by the author, Gilberto Villahermosa, to General Champoux’s mother, now sits in a place of honor in this library. These physical mementos serve as a reminder of the ties that bind. General Champoux never met the Soldiers with whom his father served, but their faces are still proudly displayed. Villanueva’s research helped bring General Champoux that much closer to his father.

Your ticket for the: The Champoux Family Story