MY STORY OF SERVICE IN SOUTH KOREA 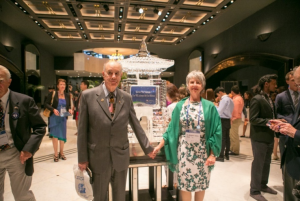 I was commissioned in 1971 through Temple University’s ROTC program and went on active duty in 1972 as a 2nd Lieutenant reporting to Ft. Ben Harrison for the Adjutant General Officer Basic Course (AGOBC), followed by six weeks at the Defense Information School (DINFOS also at Ft. Ben at that time) for the Broadcast Officer course. During a career that spanned 28 years retiring as a colonel in 1999, I had many assignments, but most were in branch immaterial slots. So beyond year five, I had few AG assignments, working mostly in Public Affairs, Civil Affairs, or in an IG position.

In 1973, I was the deputy PAO at Ft. Dix and called the AG assignments branch and asked to go on a short tour. Branch told me the only available short tours were to South Korea or Thailand as we were sending no one to Vietnam at that time. I told them I would prefer Thailand … so a few days later I got orders to Korea! I guess that’s why they call it a dream sheet.

I would be going as the Administrative Officer to Armed Forces Korea Network (AFKN). That was a perfect job for someone with my background, and I got a letter from my sponsor, LTC Myrick, welcoming me. I got off the plane in Korea in September 1973. My name was called out with a bunch of others at Camp Coiner, and I was told we were all going to the 2nd Division! I was told I would be taking command of the 10th Army Postal Unit at Camp Red Cloud. Surprise, surprise.

I had no postal knowledge (obviously I had not attended the course) and here I was as a 2LT commanding a unit that should have been commanded by a Captain, but what does not kill you makes you stronger. Long story short, it was a great assignment as anyone who has done postal knows, because of (among other things) the smiles you see on soldier’s faces when the unit does its job. And I had some great soldiers and in this little unit of less the 20 soldiers. We actually had an 8th Army Soldier of the Quarter who was presented an Army Commendation Medal by the Commander of 8th Army/USFK/UNC, General Stilwell.

In 1973, about 20 years after the Korean War, Korea was still recovering, as you can imagine, but I loved the Korean people. They were resourceful, polite to a fault, and just great to work with. And their soldiers were as tough as they come. I always knew they would become a positive force for good in the world once they recovered from the horrors of the Korean War. Little did I know how significant a force they would become.

Fast forward to 2016. As a member of the 2nd ID Association, I was informed of the Korea Revisit tour program which was conducted a number of times each year primarily in the warmer months. I always wanted to see South Korea again to see how far they had come in the 42 years since I left. Every October, my wife and I attend the Association of the U.S. Army (AUSA) annual meeting in DC and throughout the meeting, we saw just how far the country had progressed, but I wanted to see it live in the country. The Korea Revisit tour provided that opportunity for my wife and me in July 2016.

My wonderful wife, Meg, and I have been married over 36 years and she has never set foot in Korea but based on the tour structure and all I had told her from my memory, she was on board for the trip. We also added the optional tour to Korean War sites. Our tour had 121 people in it from pay grades E-3 (just got assigned during a 3-year active duty stint) to several retired GOs. We also had people on our tour who had served or were descendants of military personnel who had served in Korea during the Korean War as well as people who had served from other UN countries such as Sweden, Canada, Australia, The Philippines, Colombia, India, South Africa, The Netherlands, The United Kingdom, and others.

At our farewell dinner, General Brooks was with us along with CSM Payton. Imagine a large group of young Korean schoolgirls singing “You are My Sunshine” and giving all veterans a red rose and a kiss on the cheek. Imagine being applauded everywhere you went by a thankful group of people, who you never met. The high from the trip just never stopped, and I urge you to take the opportunity to go on this trip. How many of our allies go this far over the top to say thanks?!

As an AG, you are often the person behind the curtain, but nobody comes into the Army or leaves the Army without seeing you first and last respectively. And if they stay in, your fingerprint is on them, even if they do not know it, at every career milestone, so you really serve as the cornerstone of their military lives.

The South Korean people are really special. If you read Korean history, they have made lemonade out of lemons and not just to their benefit, but to the benefit of the world. That is a legacy that should make us all proud, and I am certainly glad to have been a very small part of it as I was given the honor to serve there.

Your ticket for the: MY STORY OF SERVICE IN SOUTH KOREA

MY STORY OF SERVICE IN SOUTH KOREA