THE EXTROM FAMILY AT HOME DURING AND AFTER THE KOREAN WAR 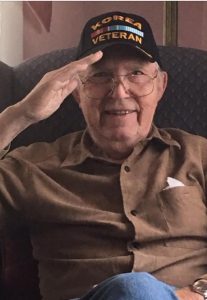 We (his four children) were not born yet while he was in Korea. In fact, he met our mother after his service ended in 1952. We didn’t know much of his story until later in life … we knew he was a U.S. Marine, but didn’t know about his time in the war because he didn’t talk about it much. We are very proud of his service, and in time we learned so much about his time spent in Korea. However, it’s really hard to imagine the horrific things he saw and endured. He keeps his memories private except for a few details.

How it affected us … in retrospect we didn’t know he was a war hero. We knew he’d been a combat vet. We knew how proud he was to be a U.S. Marine. But, we had no clue what he’d endured because he was so reticent to talk about it.

We also didn’t know that his obsession with perfection was unusual. HA! From the time we were little, his conversations were peppered with military jargon — “Spit-shine those shoes,” “Use some elbow grease,” “Quit crying. You got nothing to cry about,” and things like, “When you’re in the military, you learn to obey orders.”

He loved a good parade and from his admiration and respect for other veterans, we learned to respect and honor veterans from every war. Heroes return home from war as ordinary citizens with a laudable secret past that lives inside their memory. We knew he relived the war in his mind while trying to be an ordinary model citizen — which he was — but we also knew he had his secrets, and we needed to respect those. Our brother also proudly served as a U.S. Marine.

Dad told us once many, many years ago that he didn’t talk about his Korean War experiences because he didn’t want to glorify war.

As for Dad’s family of origin … his mother posted three flags in her front window to show support for three of her five sons. Two in WWII and one in the Korean War. She was proud of her boys. She would clip articles from the newspapers and save them for each son. She wrote to each one regularly and prayed for their safety as well as the others who served. One served with the 82nd Airborne (508th) paratroopers. He was shot in the jaw and received shrapnel in his leg. We’re sure she was devastated, yet thankful. No doubt, she worried that any day she might hear the knock on the door. By God’s grace, all three sons returned home. (Dad’s mother and father and nine siblings are all gone now.)

The following is a short biographical sketch written for an awards ceremony in our father’s hometown when he was awarded the Heroic Hearts of Gold Award.

As a child of the Depression, Robert Extrom never realized his family’s poverty would give him the perseverance, courage, and loyalty he would need in the service of his country.

At 18, when tensions were escalating between North and South Korea, Bob enlisted in the Marine Corps. After completing boot camp at Parris Island, South Carolina, he was trained in radio/communications at Camp Pendleton in California. The Marines’ motto, Semper Fidelis—“Always Faithful”—took root in Bob’s heart when the 1st Marine Division received orders to ship off to Korea for war.

On September 15, 1950, Marine forces landed at the strategic port of Inchon and pushed inland to recapture Seoul. Trudging through rice paddies, Bob detected erratic bubbles in the water and his captain urged him to fall back—the radio equipment on his back was drawing North Korean sniper fire. By November, the 1st Marines were fighting for survival in the Chosin Reservoir, where temperatures dipped to -45° F. The Chinese outnumbered the Marines 8-1, completely surrounding them. During fierce engagement, Bob was blown off his feet by mortar shells, sustaining a concussion and a back injury. Large chunks of shrapnel embedded in his spare battery thus saving his life.

Bob became one of the courageous “Frozen Chosin,” or “The Chosin Few,” who made it out of the Chosin Reservoir alive. For heroically putting himself in harm’s way and persevering to keep lines of communication open, Bob received two combat “V” awards and was later promoted to Staff Sergeant. OOHRAH!!

Your ticket for the: THE EXTROM FAMILY AT HOME DURING AND AFTER THE KOREAN WAR

THE EXTROM FAMILY AT HOME DURING AND AFTER THE KOREAN WAR