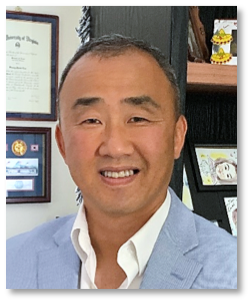 As KDVA’s Senior Vice President of Operations, Colonel (Retired) Steve Lee is responsible for overall leadership, direction, and strategic vision of the KDVA.  This is an exciting time for KDVA as the organization works to further enhance the U.S.-ROK Alliance by expanding the organization, membership, and programs to facilitate education, discussion, and research on topics vital to both countries and those who built and serve the Alliance.

He has been interviewed on NBC’s The Today Show and FOX News.  He has lectured at the Academic Council on the United Nations System, Ewha Woman’s University, and Korea National Defense University.  He has moderated and participated in numerous panels about the ROK-U.S. Alliance.  And he has briefed the U.S. Vice President and Secretary of Defense, ROK Minister of National Defense and Minister of Foreign Affairs, NATO Secretary General, Dutch Prime Minister, and dozens of Members of the U.S. Congress.

During and after 9/11, Steve worked on the North Korean nuclear and missile issues for the Joint Staff as the J-2 Senior Korea Analyst/Briefer.  He then served on the Army Staff as the Pol-Mil Director for Korea/Japan and later became the Executive Officer to the Army’s G-35 (Director of Strategy, Plans and Policy), whose responsibilities included Army war plans, international affairs, stability operations strategy, and nuclear policy.

During his assignments as the Assistant Army Attaché at the U.S. Embassy in Seoul and as the Joint Staff’s North Korea Country Director, he worked on strategic ROK-U.S. pol-mil issues.

Steve was selected as the Chief, Commander’s Initiatives Group (CIG) in UNC/CFC/USFK for Generals Thurman and Scaparrotti and later served as the Director, Strategic Communications. As the Secretary of the UNC component of the Military Armistice Commission (UNCMAC), he led a team responsible for managing the implementation of the July 1953 Korean Armistice Agreement to include negotiating with the North Korean People’s Army.  For his last assignment in the Army, he was selected to serve as the UNC Coordinator for Summits for the historic April 2018 Inter-Korean Summit in Panmunjeom (Joint Security Area).

In seven assignments covering 13 years in South Korea, he has traveled throughout the country, including the Northwest Islands and 25 South Korean guard posts in the demilitarized zone (DMZ).  He has also visited China, Japan, India, Thailand, Malaysia, Taiwan, Singapore, Guam, and Vietnam.

Steve and his wife, Grace, have four children:  Mariam, Caleb, Lincoln, and Ella.  The family’s motto is “Faith, Family, Friends, Fun.”  They enjoy spending time together and doing Christian work.  They were selected as the Yongsan Army Garrison’s 2017 Volunteer Family of the Year.  Their hometown is Potomac Falls, VA.

Steve is the Director, Awana Ministry at Potomac Baptist Church and the former Chairman, School Advisory Council of Seoul American Elementary School.  He enjoyed coaching his children in flag football, basketball, and volleyball.  His life and military experiences are included in Faces of Korea by Richard Harris.

Your ticket for the: Col. (Ret.) Steve Lee