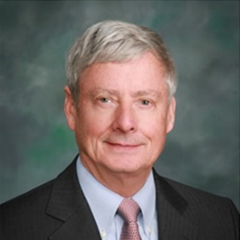 General (Ret.) Walter “Skip” Sharp was born in Morgantown, West Virginia while his father was fighting in the Korean War.  General Sharp graduated from West Point in 1974 and was commissioned as an armor officer.  He earned an M.S. in operations research and system analysis from Rensselaer Polytechnic Institute and is a graduate of the Army War College.

General Sharp had four assignments at the Pentagon on the Joint Staff.  He was the Deputy Director, J5 for Western Hemisphere/Global Transnational Issues; Vice Director, J8 for Force Structure, Resources, and Assessment; Director for Strategic Plans and Policy, J5; and the Director of the Joint Staff.

General (Ret.) and Mrs. Sharp live in the Washington, D.C. area.  He is consulting for and on the BODs of several U.S. companies.  General Sharp is the Chairman of the Board of Directors of the Military Officers Association of America (MOAA). He is on the BOD of The Korea Society and is involved in Northeast Asia and especially Korea strategy and policy discussions at several Washington, D.C. area Think Tanks. General Sharp is the former Chairman and President of the Korea Defense Veterans Association, and he is currently serving on the KDVA Council of Advisors.

Your ticket for the: Gen. (Ret.) Walter Sharp