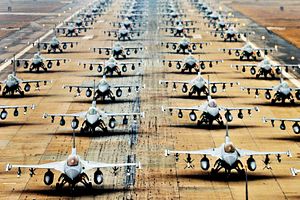 F-16 Fighting Falcons demonstrate an “Elephant Walk” as they taxi down a runway during an exercise at Kunsan Air Base, South Korea, on March 2, 2012. Credit: DoD photo by Senior Airman Brittany Auld, U.S. Air Force.

Since South Korean President Moon Jae-in took office in 2017, however, Moon has tried to conduct scaled-down exercises to entice North Korean leader Kim Jong Un to engage in talks with him and the U.S. administration, with the hope of achieving denuclearization on the Korean Peninsula. As a result, Seoul and Washington have conducted considerably smaller exercises in the past few years, but North Korea still recently released statements to criticize the exercises and the presence of U.S. troops stationed in South Korea.

“The dangerous war exercises pushed ahead with by the US and the south Korean side in defiance of our repeated warnings will surely make themselves face more serious security threat,” said Kim Yo Jong, sister of the North Korean leader Kim Jong Un, in a statement released on Tuesday.

She also criticized the Biden administration by saying that the exercises prove “that ‘diplomatic engagement’ and ‘dialogue with no strings attached’ touted by the present US administration is hypocrisy to cover up its aggressive nature.”

A more surprising point in her statement is that she targeted the U.S. troops in South Korea directly as “the root cause” of tension on the Korean Peninsula. At the end of her statement, she implied that the statement was released “upon authorization,” which indicates that Kim Jong Un shares his sister’s stance.

Since Kim Yo Jong’s statement was published on Tuesday, some lawmakers in the ruling Democratic Party have argued that the government needs to reconsider holding the exercises, as the North recently showed its willingness to talk with the South by restoring the communication channels. However, former generals and lawmakers who had served in the military have strongly suggested that the government proceed with the exercises, saying that national security should come first. Seoul and Washington have repeatedly made clear that the exercises are purely defensive in nature with no hostile intent toward North Korea and have conducted rehearsals on Tuesday as planned.

With Seoul and Washington holding firm on the exercises, North Korea has not responded to hotline calls from the South, even though the two Koreas restored their communication channels two weeks ago. Experts predict that the North will not answer the South’s calls in the next few weeks. The full exercises are slated to open on August 16 and run through August 26.

Kim Yong Chol, department director of the Central Committee of the Workers’ Party, also released a statement on Wednesday to back up Kim Yo Jong’s statement. He said that “we will make them realize by the minute what a dangerous choice they made and what a serious security crisis they will face because of their wrong choice.”

Most experts say that the government needs to conduct joint military exercises to prepare for possible attack by the North. However, some experts argue that Seoul and Washington need to provide scenarios in which they can consider halting the exercises in return for the North’s moves toward denuclearization.

“In order to resolve the escalation of military tensions on the Korean Peninsula caused by North Korea’s backlash and warnings, South Korea and the U.S. need to declare that if North Korea actually freezes its nuclear programs, it can halt the exercises,” Cheong said. A North Korean nuclear freeze would include measures such as suspending further production of nuclear warheads, suspending the development of nuclear submarines, and accepting inspections of Yongbyon nuclear facilities.

Experts predict that the North would not fire intercontinental ballistic missiles or submarine-launched ballistic missiles during or after the exercises. That level of provocation would provide a critical reason for the U.S. not to consider lifting the devastating economic sanctions against the North. However, Seoul said it will keep tabs on the North’s moves.

The Korean Lunar New Year is celebrated by eating duk-guk. This dish is a soup of thinly sliced rice cakes. Koreans turn a year older with the start of each New Year … and in the modern age, they also celebrate it on the date of their birth as well. So, eating duk-guk means people get a year older and the white rice cakes in the soup represent a clean start and new beginning for the New Year. #KDVA #Korea101
Since Miyeok (Seaweed) is slippery, a Korean myth is one will “slip” in test scores if you eat seaweed soup before exams. #KDVA #KOREA101
Kimchi is a Korean dish of spicy pickled cabbage. There are several types of Kimchi.
Taekwondo is Korea’s martial arts, and many compete in the Olympics to become the world champion in taekwondo.

Your ticket for the: The Diplomat – North Korea Issues Warning Over South Korea-US Joint Military Exercises