A Tribute to General and Ambassador Paik, Sun-yup

The Immeasurable Importance of General and Ambassador Paik, Sun-yup 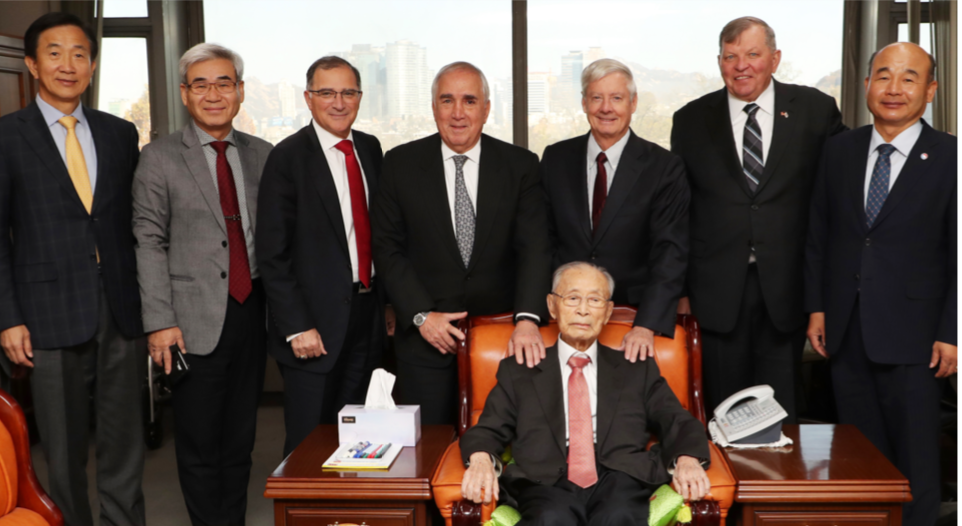 Former CFC Commanders and Deputy Commanders met legendary Gen. (Ret.) Paik, Sun Yup. As part of the 1st Former CFC Commander/Deputy Commander Forum in Seoul on Nov 14, 2019, Generals Kwon, Scaparrotti, Tilelli, Sharp, Thurman, and Jung visited the 99 year old General Paik who was the first ROK Chairman of the Joint Chiefs of Staff, ROK Ambassador to several countries, and an infrastructure pioneer. General Paik helped build the ROK-U.S. Alliance into one of the most important in the world.

The passing of General and Ambassador Paik, Sun-yup marks the closing of the first 70 years of the ROK-U.S. Alliance, while his life and contributions to the Alliance serve as a great role model for the future of this close and invaluable relationship.  General Paik’s role in defending South Korea against North Korea starting on June 25, 1950 is of historic importance to both South Korea and the United States.  He served as the division commander of the 1st ROK Infantry Division which took the brunt of North Korea’s surprise attack, helped defend the Pusan Perimeter, and led the fight into Pyongyang on October 19, 1950.  Later as the first ROK Army Chief of Staff and first ROK Chairman of the Joint Chiefs of Staff, he worked to build up the post-war ROK military.

After retiring from the ROK military as the country’s first four-star general, he continued in public service as Ambassador to Taiwan, Canada, France, and several other countries.  Then he served as ROK Minister of Transportation and launched the construction of the Seoul Subway system.  He was also instrumental in the construction of the War Memorial of Korea.

The distinguished and very long history of General Paik’s public service is truly immeasurable and unequaled.

His life serves as an example for future generations to care about the ROK-U.S. Alliance, to work for the Alliance, and to do so with integrity, hard work, and understanding.  The members of KDVA are very honored to have known this great man.  General (Retired) John Tilelli, the former Commander-in-Chief of the United Nations Command, Combined Forces Command, and U.S. Forces Command, captured the essence of General Paik and his legacy for the ROK-U.S. Alliance, “General Paik’s legend goes far beyond his military contributions and battlefield heroics.  When I commanded in Korea from 1996 to 1999, his was the voice I sought and heard when we faced challenging situations because he understood both the ROK and U.S. sides, and how we needed to work together.  I have lost a most significant friend and mentor in my life, and my heart goes out to his family, the people of South Korea, and those of us who care and love the ROK-U.S. Alliance.  He was a National Hero of the Republic of Korea.”

KDVA will carry on General Paik’s legacy and lifetime of work for the Alliance in 2020 and well into the next several generations of people who care for and support the great Alliance.

In South Korea is it not uncommon to see men wearing make-up, particularly BB cream. South Korea accounts for about one-fifth of the global market for male cosmetics. #KOREA101 #KDVA #KoreaDefenseVeteransAssociation
South Korea has a gigantic underground city underneath the InterContinental Seoul COEX Hotel in central Gangnam. Koreans call it the COEX for short.
South Korea’s main communication. platform for texting, calling, videochats, and even mobile banking is KakaoTalk.
“KDVA & KUSAF Honors” recognize outstanding members for their contributions to the ROK-U.S. Alliance & to inspire making a difference for the Alliance’s future. Nominations will be accepted through 30 Sept. 2021. Visit http://KDVA.VET/HONORS  for nomination rules & to submit.

Your ticket for the: A Tribute to General and Ambassador Paik, Sun-yup

A Tribute to General and Ambassador Paik, Sun-yup