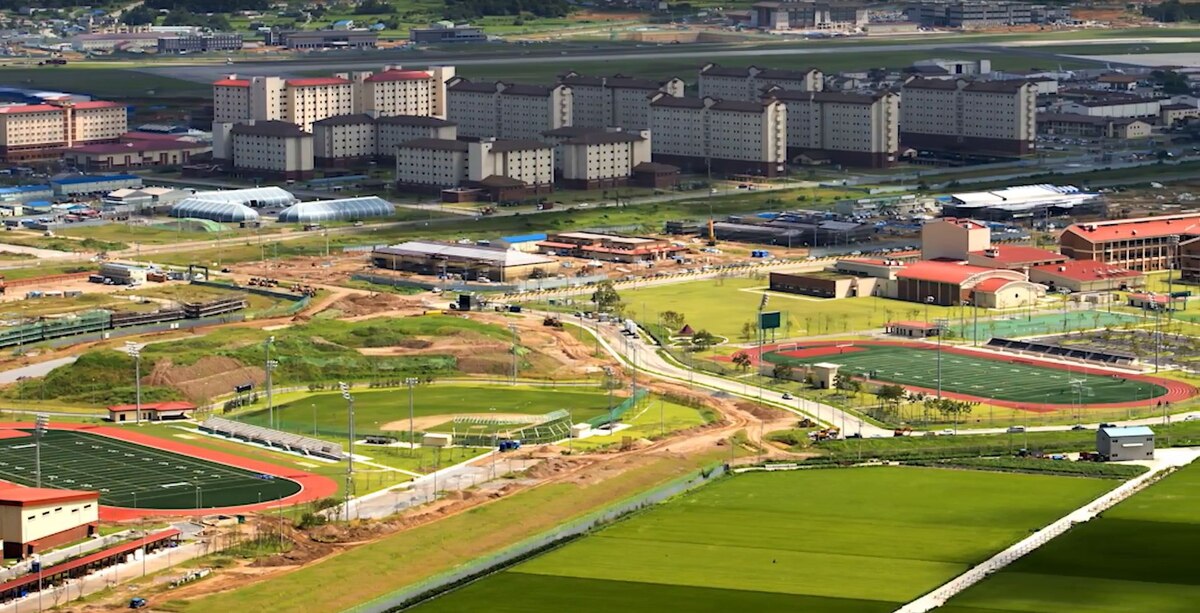 At nearly $11 billion, Camp Humphreys is a “slice of America” inside South Korea. (Arm)

The sprawling Camp Humphreys Army base in South Korea gave a heads up that some installation services are expected to encounter delays, thanks to the expiration of host-nation support last month that helps keep more than 28,000 U.S. troops there.

The 2019 Special Measures Agreement, which expired on Dec. 31, required South Korea to pay nearly $1 billion to offset stationing costs of U.S. troops — amounting to $70 million more from what Seoul paid the previous year. But President Donald Trump is pushing Seoul to pay even more in a 2020 deal, prompting both states to remain at odds with one another over a future arrangement.

“Due to the Special Measures Agreement lapse and implementation of [U.S.Forces Korea] austerity measures, including cessation of overtime pay for Korean National employees, USAG Humphreys will experience some delays to certain installation services, most notably post office hours and after-hours work performed by the Directorate of Public Works,” Camp Humphreys wrote in a Facebook post on Jan. 24.

Camp Humphreys, the largest U.S. base overseas, did note “all matters involving life, health and safety will continue without interruption.” This includes all fire and emergency services.

“We greatly value our Korean National workforce and their contributions to making USAG Humphreys a valued installation, and will continue to provide our community with timely updates that impact installation services,” Camp Humphreys said in the post.

Camp Humphreys did not immediately respond to a request for comment from Military Times requesting a full list of installation services likely to face delays, and whether readiness will suffer until the U.S. and South Korea wrap up a deal.

They’re more likely to complain that the retired Navy four-star is rude and undiplomatic.

Trump has regularly stated he wants allies to bolster their financial contributions to support U.S. troops. For example, he claimed in February 2019 South Korea was costing the U.S. $5 billion annually, and tweeted in August 2019 that South Korea is a “very wealthy nation that now feels an obligation to contribute to the military defense provided by the United States of America.”

It’s unclear exactly how much money the U.S. is currently seeking from Seoul, but multiple media outlets reported in November the U.S. was requesting $4.7 billion in host-nation support for 2020 — nearly five times the amount South Korea paid in 2019.

On top of that, South Korea has also assisted with major U.S. projects like building Camp Humphreys. The base cost nearly $10.8 billion and former commander of United States Forces Korea, Army Gen. Vincent Brooks, said Seoul paid for approximately 90 percent of the project.

Meanwhile, Secretary of State Mike Pompeo and Secretary of Defense Mark Esper published an op-ed in the Wall Street Journal on Jan. 16, titled “South Korea is an ally, not a dependent.” The op-ed did not disclose a specific amount, but said both parties must “find a better way to share costs of defense.”

“The current special measures agreement captures only a portion of the cost of defending South Korea,” Pompeo and Esper wrote. “The U.S. believes it should cover more. As we improve the burden-sharing arrangement, both sides will benefit.”

“South Korea’s taking on a greater share of the load will ensure the alliance remains the linchpin of peace and prosperity on the Korean Peninsula, in Northeast Asia — and across the world,” they wrote.

Host-nation support agreements have typically lasted five years, but the 2019 negotiations only resulted in a one-year deal. That’s why Washington and Seoul are back at the negotiating table now.

Retired Army Col. David Maxwell, who has several decades of military service in Asia, told Military Times in December that “ongoing problems” would emerge if the Special Measures Agreement expired like it has.

This would continue to be an issue if annual agreements continue, he said.

“There are going to be ongoing problems if the [Special Measures Agreement] needs to be negotiated every year,” Maxwell said.

Maxwell told Military Times on Jan. 25 that once South Korean employees are furloughed, base services and military units will be impacted as service members provide “borrowed military manpower” to conduct assignments that are “outside their normally assigned duties and units.”

“Unit training and readiness will be impacted,” Maxwell said.

Your ticket for the: Camp Humphreys: Prepare for installation service delays while US, South Korea negotiate cost-sharing agreement